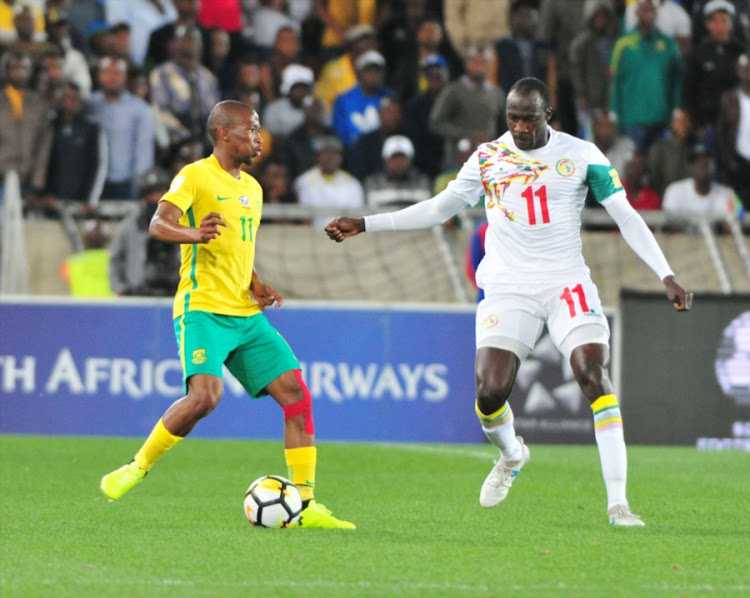 Kamohelo Mokotjo almost permanently seems to be on the verge of a Bafana Bafana breakthrough.

At 27‚ the caps - Mokotjo has just 11 - have been hard to come by despite consistently earning rave reviews as a midfield star in the Netherlands‚ before his move to Brentford City in the English Championship last year.

Two starts and a substitute's appearance in Bafana's seven frontline matches played by the senior team last year‚ plus another start in a Four Nations tournament final win against hosts Zambia in March‚ might not sound like much.

For Mokotjo‚ it was the closest he's come to a run in the national team.

Injuries to Hlompho Kekana and Bongani Zungu‚ and Andile Jali having not been picked as he finds his feet back in the Premier Soccer League (PSL) with Mamelodi Sundowns‚ have thrust Mokotjo into the spotlight for Bafana's central midfield in Saturday's 2019 Africa Cup of Nations (Afcon) qualifier against Libya.

He seems likely to partner Dean Furman in the heart of the Bafana midfield.

Mokotjo knows that‚ with Bafana entering a new four-year cycle towards the 2022 FIFA World Cup in Qatar as they meet Libya at Moses Mabhida Stadium‚ an impressive performance could finally see him nail down a starting place going forward.

"For me‚ firstly‚ it's just an honour to get called up. And then I knew that the game time would come as long as I was doing well for my club‚" Mokotjo said this week.

"I just take it one step at a time‚ regardless of what anyone says. It's just important that I focus on myself‚ and take my time with my craft.

"I think it becomes much easier when I come to the national team. I have a lot of players who are accustomed to the style that I play.

"When I'm here I solely focus on what we're doing here and when I go back I know what my job is back in England too. So I try not to complicate things.

"It's a very important qualifier. So we need to get the maximum result.

"I think for me‚ every game that I play for the national team is important‚ regardless of the competition or whether it's a friendly or a qualifier.

"I just take it one game at a time‚ and make sure I perform to the best of my abilities."

Mokotjo played 35 of Brentford's 46 league games as they finished ninth in the 24-team Championship last season‚ three places outside the playoffs.

He was one of four senior players who captained the side.

"It was an honour of course. It's an honour captaining any side‚" he said.

"It meant a lot to me because it just showed how much of a leader I am in the dressing room‚ and at the club."

Bafana started their Cameroon 2019 Afcon qualifying campaign with a 2-0 win against Nigeria in June last year.

Libya started with a 5-1 thrashing of Seychelles in Egypt.