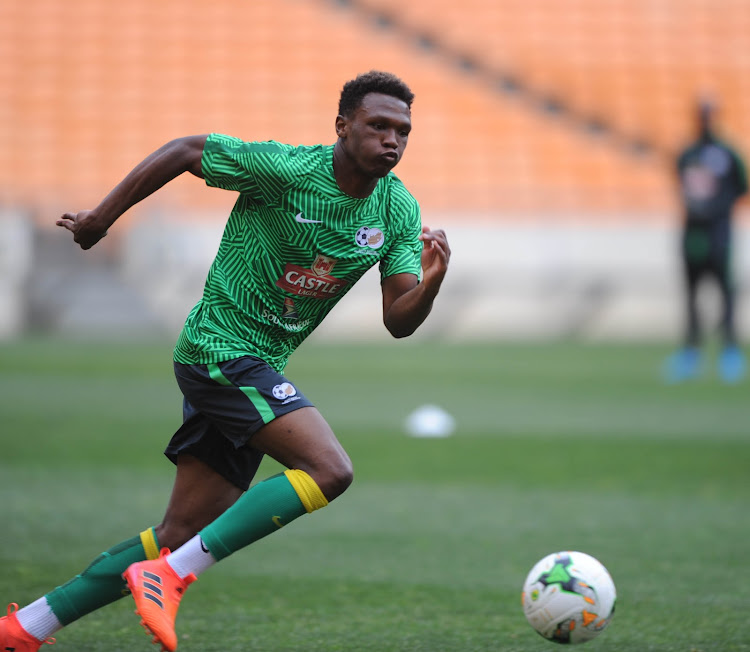 Lebo Mothiba trains during the South Africa training sesssion October 2 2017 at FNB Stadium. The French-based striker will miss Bafana Bafana's 2019 Africa Cup of Nations (Afcon) qualifier against Libya on Saturday September 8 2018 at Moses Mabhida Stadium in Durban through an injury which his new Ligue1 club Strasbourg said will rule him out for 8 to 10 days.
Image: Sydney Mahlangu /BackpagePix

Strasbourg have announced that Bafana Bafana striker Lebo Mothiba will be out for between eight and 10 days‚ which should mean he will be available for their next Ligue 1 clash on September 15.

Mothiba was withdrawn from the Bafana squad to face Libya in a crucial 2019 Africa Cup of Nations (Afcon) qualifier at home to Libya at Moses Mabhida Stadium in Durban on Saturday.

He was replaced by uncapped Bidvest Wits forward Mxolisi Macuphu‚ but it appears his injury is not serious.

In fact‚ Strasbourg believe he should be back to face Keagan Dolly’s Montpellier in their next fixture after the international break.

“Struck on the right thigh after coming on [as a substitute] to play against Nantes‚ the striker from Bafana Bafana is unavailable for a period of eight to 10 days‚” the Ligue 1 club said following an assessment of the player.

The 22-year-old only arrived at Strasbourg last week after a surprise transfer from Lille‚ and his absence from national team action will at least give him time to work with his new club mates in France.

Mothiba‚ who has been in excellent form in France in the last 12 months‚ first on loan at Vallenciennes in Ligue 2 and then at top-flight Lille in the second half of last season‚ was set to be a key figure for national team coach Stuart Baxter against Libya.

His withdrawal drew great disappointment from the technical team‚ but that will at least be tempered by the knowledge that he should be available for the must-win double-header against Seychelles in October.

Mothiba made his Bafana debut against Angola in March and scored‚ following that up with another goal in his second game against Zambia three days later.

Bidvest Wits centre-forward Mxolisi Macuphu has been called up as a replacement for injured Lebogang Mothiba for Bafana Bafana’s Africa Cup of ...
Sport
3 years ago

Bafana Bafana striker Lebo Mothiba has completed his move to French Ligue 1 side Strasbourg and admitted it was with a “heavy heart” that he was ...
Sport
3 years ago