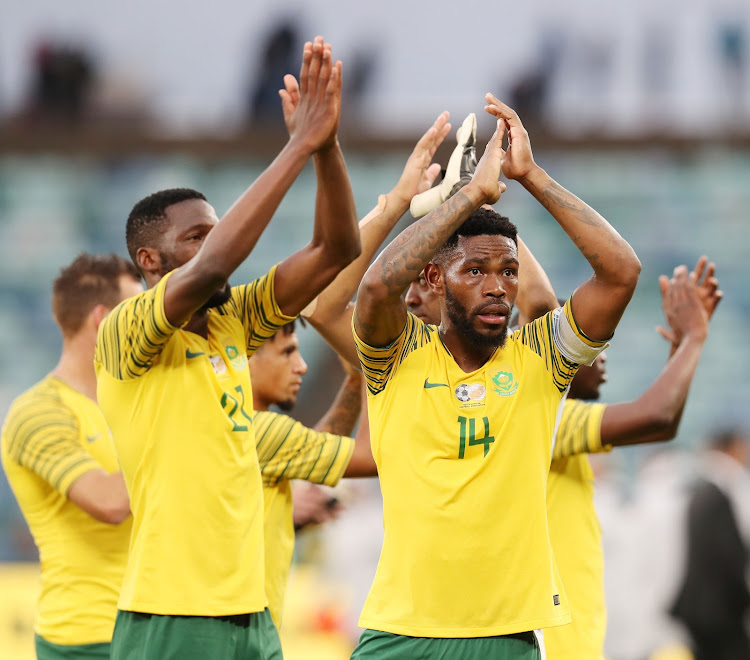 Thulani Hlatshwayo of South Africa and teammates thanking the fans during the 2019 African Cup Of Nations Qualifier match between South Africa and Libya at the Moses Mabhida Stadium, Durban on 08 September 2018.
Image: ©Muzi Ntombela/BackpagePix

South Africa were held to a disappointing 0-0 draw by Libya in their African Nations Cup qualifier in Durban on Saturday‚ a sixth goalless stalemate in their last eight home preliminary matches in the continental competition.

Once again‚ the side were unable to break down their opponents‚ with the best chances in the game falling the way of Libya.

TimesLIVE rates the performance of the Bafana Bafana players.

Khune made a couple of good saves‚ though they were ones you would expect a keeper of his quality to reach.

Also seemingly did enough to put Libyan striker Anias Saltou off at the vital moment when the latter appeared to have a tap-in‚ but ended up slicing the ball onto the post.

Bafana gave Libya far too much room on the right-hand side of their defence‚ especially in the first half‚ and should have been punished at least once.

Mphahlele tightened things up in the second period‚ but by then the visitors were also sitting back more.

Imperious at the back‚ the captain made a number of crucial interventions and showed excellent strength against the muscular Saltou.

Also seemed to organise his line well‚ catching the visitors offside on a number of occasions.

Had to be bailed out a couple of times by his fellow defenders after errors at the back‚ but also did some good work too.

Had an excellent headed chance that he will be disappointed he did not either put on target or back across goal for a teammate.

Was a willing runner and got forward on a number of occasions‚ blasting over when he really should have hit the target late in the first half.

Also put in some dangerous crosses. Defensively he did OK and showed good pace to provide cover when the visitors did manage to get behind the centre-backs.

Neat and tidy as always‚ but probably didn’t have the impact he would have liked on the game. Looked a bit uncertain in possession at times and faded in and out of the contest.

His best performance in a Bafana jersey for some time‚ Furman controlled the midfield in the first half especially‚ spraying passes wide and winning opposition ball.

Had a chance early on when he tried to chip the Libyan keeper but the ball went just over the bar.

Too easily pushed off the ball at times‚ Vilakazi battled to get into the game and into the kind of positions that make him a danger on attack.

Probably not his best position in the central midfield to be fair‚ and he was better when he pushed further up the pitch in the second period.

Replaced by Modiba after 79 minutes.

Lively performance from the winger‚ he looked a threat on the ball and produced some wonderful passes.

Blazed over when he had worked himself in to a good shooting position in the second half‚ though it was on his less-favoured right foot.

Had one moment of magic when he flicked the ball up and volley on the turn‚ but the shot was straight at the keeper.

Worked hard throughout the game and to be fair to him received very little service in good areas‚ with too many high balls in to the box‚ which is not his game.

The Libyan defenders did a good job on him too.

Came off at halftime when he was replaced by Bradley Grobler‚ but that was more for a change of system than a reflection of his play.

He was sloppy in giving the ball away that led to the big chance for Saltou.

Came on at halftime and but for a few half-chances with headers‚ was not able to get on the end of much in the box.

To be fair he prefers service to his feet and there was not much of that on offer.

Had around 15 minutes with injury-time to conjure something and came close when he looked to be through on goal late on‚ only to be brought down by Ahmed Al-Maghasi in a cynical piece of play.