Can Justin Shonga transfer his sparkling form for Zambia to Orlando Pirates? 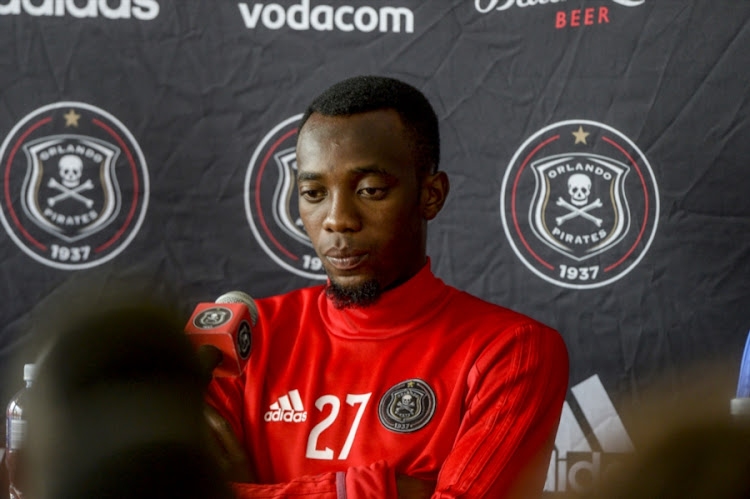 Orlando Pirates forward Justin Shonga continued his fine form with the national team as he netted for Zambia in a 1-0 friendly win over Gabon on Tuesday.

The goal follows an equaliser by Shonga on Saturday as Chipolopolo were held to a 1-1 draw in Namibia in their 2019 Africa Cup of Nations (Afcon) qualifier.

Goals in successive games should do wonders for the confidence of the Pirates forward‚ who has scored just once from the penalty spot for The Buccaneers this season in their league opener against Highlands Park.

Shonga’s Pirates teammate Augustine Mulenga also featured in the matches and they will hope the duo transfer their form into Saturday’s home clash with SuperSport United in the Absa Premiership.

Kaizer Chiefs forward Khama Billiat netted for Zimbabwe in their 1-1 draw in Congo-Brazzaville‚ a game in which nine of the starters for the Warriors are currently based in SA and a 10th‚ Knowledge Musona‚ is a former PSL star.

Only Welsh-based midfielder Alec Mudimu had never played in the Premier Soccer League‚ with the likes of Chiefs’ Teenage Hadebe‚ Pirates’ Marshall Munetsi and Kuda Mahachi‚ and SuperSport United’s Evans Rusike all given a run.

Cape Town City’s Edmilson and Mamelodi Sundowns forgotten man Luis Miquissone‚ sent out on loan to National First Division side Royal Eagles‚ both played for Mozambique in their 2-2 home draw with Guinea-Bissau‚ while new Chiefs signing Godfrey Walusimbi played for Uganda in their 0-0 draw with Tanzania.

With the FIFA international break having come to a close on Tuesday‚ the players will be making their way back from across the continent ahead of the weekend’s Absa Premiership fixtures.

Former Orlando Pirates midfielder Thandani Ntshumayelo has apologised to former boss Irvin Khoza after a four-year drugs ban that appeared to have ...
Sport
3 years ago