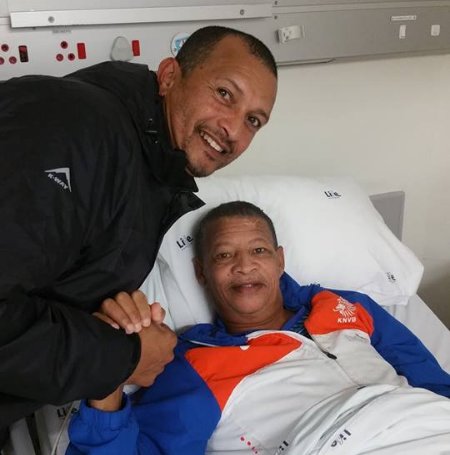 Jeremy Wyngaard posted this picture of him with Reggie Jantjies on July 6 2018 during a visit to the former Cape Town Spurs and Hellenic star player in a rehab centre in Cape Town.
Image: Jeremy Wyngaard/Twitter

The Premier Soccer League (PSL) will observe a moment’s silence in their matches this weekend for Kofi Annan‚ Nicholas Gumede and Reggie Jantjies.

“This will apply at all Absa Premiership‚ National First Division and MultiChoice Diski Challenge fixtures on Saturday and Sunday this weekend‚ 15/16 September 2018.

“Mr Gumede‚ the chairman of Uthongathi FC in the National First Division‚ passed on this week and will be buried on Sunday‚ 16 September 2018 at Tongaat Town Hall.

“The late Reggie Jantjies‚ formerly with Cape Town Spurs and Hellenic FC‚ passed on this week [on Wednesday].

“The Premier Soccer League remembers all three men for their contribution to football and humanity.”

Reggie Jantjies has died in Cape Town.
Sport
3 years ago

Reggie Jantjies could have made a 1980s Bafana‚ says Gavin Hunt

Reggie Jantjies could have played for a South African national team or a club in Europe in the 1980s‚ former teammates have said.
Sport
3 years ago