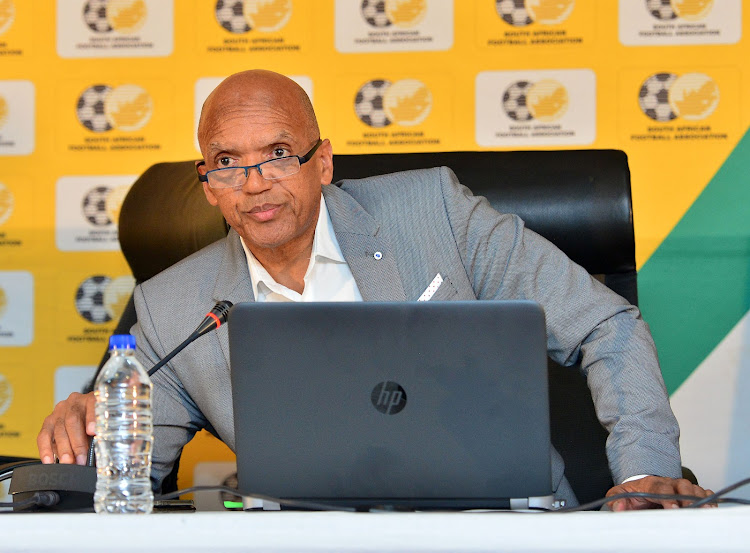 The SA Football Association chief executive Dennis Mumble speaks during a press conference at the associations headquarters at Safa House in Nasrec, south of Johannesburg, on March 29 2018.
Image: Samuel Shivambu/BackpagePix

SA Football Association (Safa) chief executive Dennis Mumble is considering not renewing his contract‚ which ends at the end of next month.

Three sources confirmed to TimesLIVE that Mumble is yet to undertake to a renewal‚ and that he has indicated to various people that he intends not to.

Mumble is currently on leave and could not be reached for comment.

Safa president Danny Jordaan has apparently tasked various officials‚ headed by vice-president Gay Mokoena‚ to begin the process of establishing Mumble’s intention on renewing his contract‚ which expires at the end of October.

So far Mumble has not made an undertaking that he will‚ and has indicated that he is considering not renewing.

Mumble’s contract was apparently initially extended for six months from March due to a delay in the Safa elections‚ which had initially been scheduled for that month.

Mumble‚ as chief executive‚ had a critical role to play organising the elective congress at which Jordaan was eventually re-elected at Sandton Convention Centre on May 26.

Mumble’s reasons for not wanting to renew his contract were not established.

However a report in a Sunday newspaper this weekend‚ citing a letter by Mumble to Safa’s regions and associate members‚ portrays an association in some state of financial disarray.

The report said that Safa was in financial tatters with many of their regions facing closure due to non-payment of monthly grants.

Safa was reported as reeling from sums owed due to various lawsuits amounting to millions of rands‚ including legal costs awarded by the court to former chief executive Leslie Sedibe‚ and more than R30m owed to Safa’s former travel agent‚ Fli-Afrika Travel.

Safa communications manager Dominic Chimhavi said he could not comment on whether Mumble intended to renew his contract or not.

Mumble has served as Safa chief executive since Jordaan was initially elected president in September 2013.

The two are close allies and Jordaan would have wanted experienced administrator Mumble to continue in the role.

Mumble was the team manager of Bafana Bafana in the buildup to and during the 2010 Fifa World Cup in South Africa.