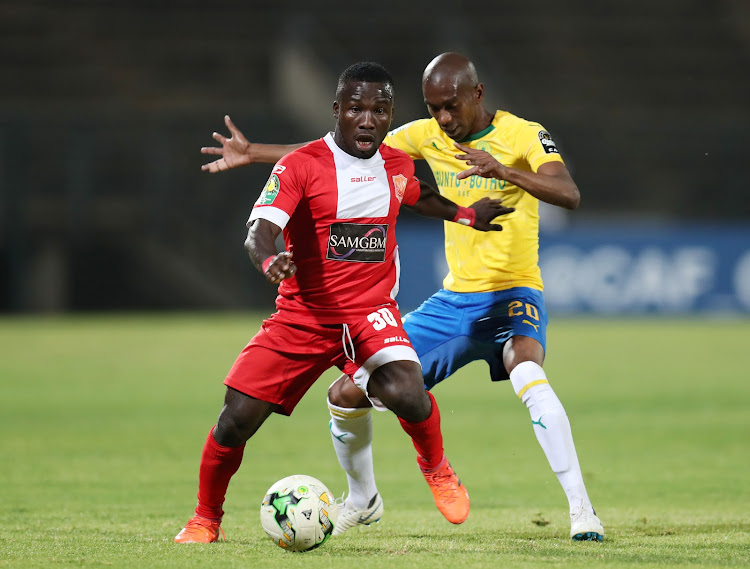 Mandela Ocansey of Horoya SC is challenged by Anele Ngcongca of Mamelodi Sundowns during the Caf Champions League match at the Lucas Moripe Stadium in Atteridgeville, west of Pretoria, on August 28 2018.
Image: Muzi Ntombela/BackpagePix

Mamelodi Sundowns will be fired up to atone for their Caf Champions League and MTN8 exits when they meet AmaZulu in the Absa Premiership at King Zwelithini Stadium on Sunday‚ right-back Anele Ngcongca has said.

Ngcongca was asked how he thought especially the Brazilians’ string of new players who Mosimane is battling to integrate at the start of 2018-19 would react to the double blow in a match against AmaZulu in a tough venue in Umlazi, south-west of Durban.

“I think whoever starts the game against AmaZulu will be carrying a lot of pressure. I know how it feels to have been knocked out in these two competitions‚” the former Genk and Troyes defender said.

“We’ve got that anger in us . It was something that we didn’t expect. But that’s football.

“But now every player gets a chance to lift up his hand and say‚ ‘Listen‚ I’m a Sundowns player. We want to start our season actually from Sunday‚ and then going forward’.

“If I were AmaZulu I would have preferred to have played a relaxed Sundowns. But now what they will encounter is a Sundowns with a fire in the belly and ice in the head.

“A Sundowns who I believe you will now see the best of.”

Sundowns’ signings – including Toni Silva‚ Jose Ali Meza‚ Lebogang Maboe and Andile Jali – have battled to click as the team went four matches without a goal before beating City 1-0 in the MTN8 semis second leg match‚ which was only enough to take the tie to penalties.

Now Downs face a tough week in KwaZulu-Natal‚ where after meeting AmaZulu they face Lamontville Golden Arrows at Princess Magogo Stadium on Wednesday.

“It’s a tough week‚ of course. But at the end of the day we’ve done it before and it’s not something that’s new to us‚” Ngcongca said.

“The only thing we’re hoping for is that we’ll show our character. Because after being knocked out of the Champions League and MTN8 we need to bounce back and do our best to defend our league title.

“We know it won’t be an easy game against AmaZulu. Like our coach has said‚ they are not going to give it to us on a plate.

“We need to double our effort. They’re at home. It’s their advantage of course.

“But from what I remember since I’ve come to Sundowns we’ve done a good job away against AmaZulu.”

Sundowns beat then-promoted AmaZulu 3-1 in KZN in their away league fixture last season in March before Usuthu bounced back with a 2-1 away win in Pretoria.

AmaZulu out to capitalise on vulnerable Sundowns in Durban

AmaZulu FC striker Mhlengi Cele is hoping his club will capitalise on the recent poor results of Mamelodi Sundowns when the two clubs meet at the ...
Sport
3 years ago

Mamelodi Sundowns coach Pitso Mosimane has had to blend in new players before‚ and will do so again successfully‚ Bafana Bafana winger Keagan Dolly ...
Sport
3 years ago