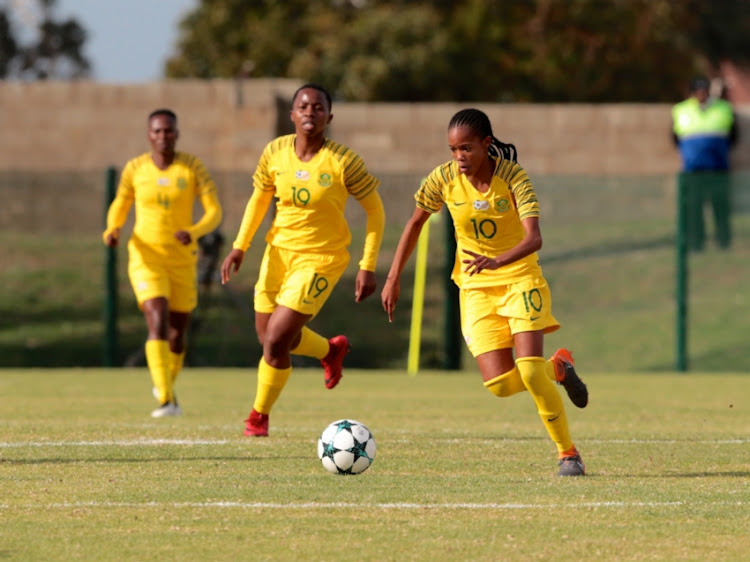 Stalwart defender Janine van Wyk made her 150th international appearance and young gun Linda Motlhalo grabbed a hat-trick as Banyana Banyana cruised to a 6-0 victory over Malawi in their 2018 COSAFA Women’s Championships Group A clash at the Wolfson Stadium in Nelson Mandela Bay on Monday.

Banyana top their pool with a maximum haul of nine points and will play East African guest nation Uganda in the semifinals at the same venue on Thursday at 15h30.

Van Wyk received a special presentation marking her achievement‚ which extends her record as the most capped women’s footballer ever from the African continent.

Coach Desiree Ellis’ side proved far too strong for the Malawians‚ who battled to cope with their pace and skill‚ and should have won by an even greater margin but for some wasteful finishing.

Banyana were ahead on 11 minutes when the Houston Dash duo of Thembi Kgatlana and Motlhalo combined‚ with the latter firing home from the edge of the box with a typically precise finish.

It was 2-0 midway through the first half as Khanya Xesi got the first of two goals‚ latching onto the loose ball after a mistake at the back for Malawi and poking the ball past the goalkeeper.

Banyana led 2-0 at the break‚ but extended that advantage seconds into the second half as Kgaelebane Mohlakoana crashed the ball home from inside the box.

The excellent Xesi was then on the end of a tap-in as Mohlakoana turned provider with a low cross from the right. Xesi moved joint top of the scorers charts at the championships with three goals‚ the same number as Cameroon’s Mpeh Bissong.

But they were joined by Motlhalo as she grabbed a first international hat-trick with two late goals‚ the first after being unselfishly set up by Kgatlana.

Uganda had booked their semi-final place earlier on Monday with a surprise 2-0 win over Zimbabwe‚ who must now anxiously wait to see if they will qualify as the best-placed runner-up.

But it seems more likely that Zambia will top Group B and Cameroon will finish as the best runner-up as they face Mozambique and Lesotho respectively‚ which would mean the African Women’s Championship-bound duo will clash again in the semi-finals.

South Africa are the defending champions and will hope to reach Saturday’s final to retain their crown.