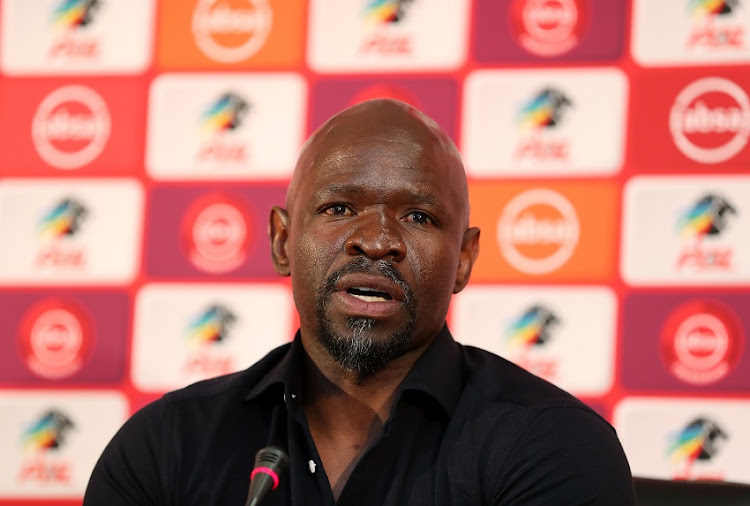 Steve Komphela, coach of Bloemfontein Celtic during the Absa Premiership 2018/19 Coach and Player of the Month Announcement at the PSL Offices, Johannesburg on 17 September 2018.
Image: ©Muzi Ntombela/BackpagePix

Bloemfontein Celtic mentor Steve Komphela was at pains to avoid talking about former club Kaizer Chiefs as he accepted his Absa premiership coach of the month award at the Premier Soccer League’s Parktown headquarters on Monday.

Komphela and Celtic defender Alfred Ndengane were named coach and player of the month for August in the strongest acknowledgement yet of the Bloemfontein side’s strong start of the season.

But the Celtic coach was well aware that there would be uncomfortable questions about his time at Chiefs‚ the club he parted ways with in April after three trophyless seasons.

Asked to compare the two environments‚ Komphela conceded that he had thought long and hard about the possibility of facing inevitable questions about his erstwhile employers.

‘‘Listen‚ environments differ and the stages of projects differ‚” a candid Komphela said.

‘‘I had to think deep coming here to say how am I going to avoid questions that are going to be comparative (to Chiefs).

‘‘Unfortunately I can’t‚ because now what you are asking me has to do with the current situation in reference to the previous‚ which are not the same.

‘‘My utterances would obviously point at certain things that would also be subject to scrutiny‚ which is something you do not want to get involved in.”

Celtic are second on the premiership standings and only trail leaders BidVest Wits on goal difference.

Their reversal of fortunes has been credited to Komphela and the judges acknowledged the side’s unbeaten run in August that also saw Celtic win three matches and draw one.

The Free State side proved their mental strength under Komphela when they beat Black Leopards 1-0 away from home in the cauldron that is Thohoyandou Stadium.

The coach said the players he has at his disposal have allowed him to mould the side into the impressive unit it has become in the last few weeks.

‘‘I think Bloemfontein Celtic have got good players, make no mistake‚” Komphela said.

‘‘We travelled with 22 to Thohoyandou (to face Black Leopards on Sunday) and we had to leave out four.

‘‘And of the four we had to leave out we were asking ourselves ’goodness me‚ Jacky Motshegwa‚ good player‚ (Roggert) Nyundu‚ good player’.

‘‘(Vusi) Shikweni‚ good player. Who do you leave out‚ what do you do?

‘‘Those are all good players‚ not saying there were no good players in my previous environment (at Chiefs).

‘‘But I am saying the stage of the project at Bloemfontein Celtic (is different).”