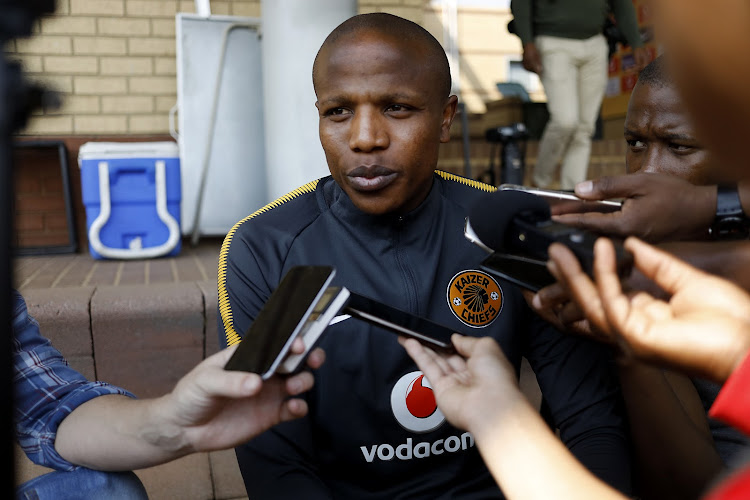 Newly signed Kaizer Chiefs attacking midfielder Lebogang Manyama says the experience he had during his short stint in the Turkish Super League will help him and his new club, the former Premier Soccer League Footballer of the Year told reporters before training at the club's training base in Naturena, south of Johannesburg, on Thursday September 20 2018.
Image: Alon Skuy

It might not have been a successful season, but Lebogang Manyama believes he learned a lot tactically in adversity in Turkey, and that he can bring that experience back to add value to Kaizer Chiefs.

Manyama made a decent, if rusty, debut for Amakhosi against old club Cape Town City on Saturday.

He was part of a 4-1 Absa Premiership thrashing of the Citizens at Cape Town Stadium that just might be a turnaround to new coach Giovanni Solinas’s nervy start at Chiefs.

Manyama will hope for more game time when Chiefs – who followed up the win against City with Tuesday night’s 2-0 victory with a near-B team against Free State Stars at Goble Park – meet AmaZulu at FNB Stadium on Saturday evening (kickoff 6pm).

It took three-and-a-half weeks from Manyama’s signing on a free transfer from Konyaspor – he moved to Turkey as a PSL Player of the Season from City in August 2017 – to be introduced into a game at Amakhosi.

Manyama had to be nursed to match fitness levels having not played in six months arriving at Chiefs from a 2017-18 season where the forward made just 10 league and cup appearances for Konyaspor, just three of those starting.

Asked to explain why, Manyama chuckled: “Three coaches in one season – it can never be easy.”

He continued: “It was a learning curve. It was tough. But ja, you have to get through those kinds of things in life.

“And luckily I think I became a better player because obviously the standard there is a bit higher.

“You get better tactically and better technically and you know where to move on the field much better.

“Because here in SA obviously we know that it’s end-to-end stuff in most of the games. But there it’s more tactical.

“And you realise a few things there. That football is not just about 200km/hour, and actually you just have to move one step and you can get all the space that you want.

“So, ja, I made sure that I tried to learn as much as possible. And hopefully I can bring it back and add value to the team.”

AmaZulu – in ninth place with two wins, two defeats and a draw from five matches – showed what a tough team they are to crack with a 3-3 draw against Mamelodi Sundowns in Umlazi in their previous fixture on Sunday.

The sometimes maligned Hendrick Ekstein says the introduction of so many quality signings at Kaizer Chiefs has created an environment of healthy ...
Sport
3 years ago

Striker Gustavo Paez scored his first goal of the season and winger Philani Zulu his second in as many games as a much-changed Kaizer Chiefs claimed ...
Sport
3 years ago