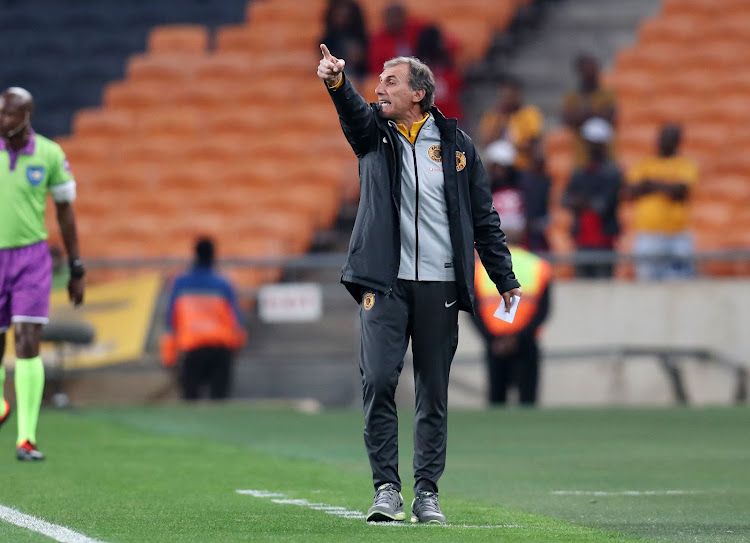 Kaizer Chiefs Italian coach Giovanni Solinas reacts on the touchline during the Absa Premiership match against AmaZulu at the FNB Stadium in Johannesburg on September 22 2018.
Image: Muzi Ntombela/BackpagePix

Kaizer Chiefs coach Giovanni Solinas has explained the reasons for his rotation of last week as being to refresh his lineup‚ keep a large squad happy‚ and have an eye to playing in continental competition soon.

Solinas said that when Chiefs begin playing in the 2018-19 Caf Confederation Cup from December they will need their fringe players – who will then start to be utilised more frequently – to have been given game time.

Having finally earned his first Absa Premiership win after a nervy start at Naturena with last Saturday’s 4-1 away win against Cape Town City‚ Solinas took a gutsy move resting key players against Free State Stars in Goble Park on Wednesday.

The gamble paid off and the mixed-strength Chiefs saw off Stars 2-0.

Then a refreshed‚ full-strength Amakhosi brushed AmaZulu aside 2-0 for a third straight in at FNB Stadium on Saturday evening.

Solinas explained the difficulty of balancing the need to get Chiefs winning convincingly again after the confidence blow of three trophy-less seasons‚ plus keeping a big squad happy‚ plus introducing fringe players in anticipation of them becoming important when the Confederation Cup starts.

“When we play every two to three days we need to refresh the lineup.

"So in this [last] week I preferred to rotate the players. This is the reason‚” Solinas said.

“It is difficult for me. Because I have a lot of good players. But the rules are that 11 players play and seven are on the bench.

“We have 32 players in the squad. Chiefs are a big club competing for a lot of trophies.

“In November‚ December we start to compete in Africa. We will also compete for the PSL‚ the Telkom Knockout and the Nedbank Cup.

“When you compete for a lot of trophies you need a big squad. A big squad is good for African competition.

“Because when you play in Africa‚ you travel for at least seven‚ eight‚ nine hours. When you come back to South Africa‚ your players are tired‚ and you will need a team to compete in the PSL.”

Solinas hastily added: “But it’s not easy to manage a big squad. Because you need to pay attention to creating the frustration.”

Solinas also‚ having arrived with just three weeks of the preseason remaining‚ has not had much time to familiarise himself with his entire squad‚ which also would appear to explain his desire for rotation at the moment.

Chiefs next meet Highlands Park at Makhulong Stadium in their league game next Tuesday (October 2).

Giovanni Solinas has explained why he has now bowed twice in two games to his star playmaker at Kaizer Chiefs‚ Khama Billiat.
Sport
2 years ago

AmaZulu coach Cavin Johnson was unimpressed with the referee after his side’s 2-0 defeat to Kaizer Chiefs at FNB Stadium on Saturday night.
Sport
2 years ago