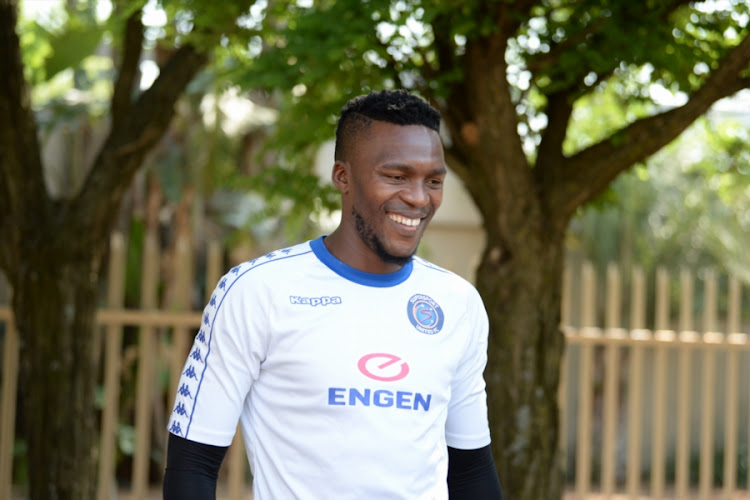 SuperSport United defender Morgan Gould smiles as he arrives to speak to the media before a training session at Megawatt Park in Sunninghill, Johannesburg, on September 26, 2018.
Image: Lefty Shivambu/Gallo Images

Bafana Bafana centreback Gould pointed out that if SuperSport plan to subdue mercurial forward Ayanda Patosi – whose brace saw City draw 2-2 against Orlando Pirates in Johannesburg last week – the Citizens have Thabo Nodada in midfield capable of conjuring up magic.

And if Matsatsantsa make a plan to keep Patosi and Nodada quiet‚ veteran Teko Modise is playing some of the best football of his career and winger Bradley Ralani is also capable of turning matches.

Asked about the threat posed especially by the unpredictable Patosi in attack‚ and Nodada in the engine room‚ Gould said: “They are very talented gentlemen. You can't take nothing from them‚ they give their all.

“Nodada – what a revelation man. I’ve got so much respect for that guy.

“He’s also very underrated – no-one speaks about him a lot. He does the utmost on the field. He actually makes that team tick.

“Whereas Patosi‚ also a very good player. There’s a bit of European experience under him.

“Bradley‚ also‚ ‘Surprise’ – I know him personally. You can go through the whole team – they’ve got names who could play anywhere in the country.

“It’s just one of those where you need to be wary of their threats‚ and try and work hard on our game.

“But definitely we’re going to know what threats they pose‚ and the experience that they have in their team with the likes of ‘Dona’ – you know‚ Teko‚ he’s class man.

“He’s very mature in his game and the way he’s approached it. So they’ve got a lot experience and threats in different parts of their football team.”

Gould cautioned SuperSport not to read too much into City having been 2-0 down against Pirates‚ and before that having lost 4-1 at home to Kaizer Chiefs‚ and Matsatsantsa having won 4-0 away against Black Leopards in their previous league fixture.

SuperSport‚ though‚ do appear to be slight favourites for the cup final.

They are the holders and beat Benni McCarthy’s City on penalties in last year’s final when current head coach Kaitano Tembo was assistant to Eric Tinkler.

SuperSport have had the better start to 2018-19‚ and are in fifth place in the Absa Premiership from four wins and two defeats out of six games.

City are in 11th having won once‚ drawn three times and lost twice in six.

The Pretoria team also have an edge in experience.

Gould has been out of favour this season‚ playing four of their six league games‚ though three were as a substitute.

The man keeping him out of the starting XI is rejuvenated former Bafana captain Bongani Khumalo.

With a wealth of experience‚ too‚ in Reneilwe Letsholonyane‚ Clayton Daniels and Dean Furman‚ SuperSport will aim to lift the trophy again in Durban on Saturday.

Bloemfontein Celtic’s beleaguered and broke owner Max Tshabalala has asked the Premier Soccer League (PSL) for money to help pay his players and ...
Sport
3 years ago

Polokwane coach praises his players after beating Wits with 10 men

Polokwane City’s grit and determination was lauded by coach Jozef Vukusic after snatching an unlikely win at the weekend over Bidvest Wits in the ...
Sport
3 years ago