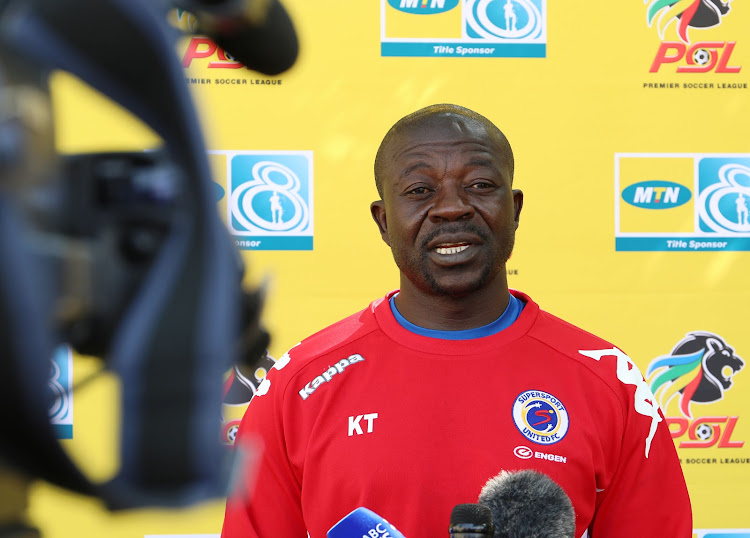 SuperSport United coach Kaitano Tembo speaks to the media before a training session at their training base at Megawatt Park in Sunninghill, Johannesburg, on September 26, 2018.
Image: Muzi Ntombela/BackpagePix

Cape Town City are a better team now than the one SuperSport United beat in last year’s MTN8 final‚ Matsantsantsa coach Kaitano Tembo has said ahead of Saturday’s decider at Moses Mabhida Stadium in Durban.

SuperSport and City meet again in the final of the MTN8 (kickoff 7pm) in a replay of 2018’s last match.

Matsantsantsa won 4-2 on penalties last year‚ also in Durban‚ after a 1-1 draw by the end of extra time.

That was the second cup final between the teams in the past two seasons‚ City having beaten SuperSport 2-1 in the 2016-17 Telkom Knockout.

#TBT: It's Cup Final week! We take a trip down memory lane to our Telkom Knockout Cup win over Supersport in 2016. Mokeke to Putsche, Putsche to Ngoma... the rest is City history! 🏆#iamCityFC pic.twitter.com/McClJ5MhkH

“It’s always hard to prepare against Cape Town City. All the cup finals they have played have been against us‚” Tembo said.

“You can see the trend that we’ve been meeting each other in cup finals‚ and it’s going to be a tough game.

“City have improved from last year’s final. I think [City coach] Benni McCarthy has done a wonderful job. They are a good team now.

“They are more organised‚ they play good possession‚ good buildup from the back‚ and they’ve also got speed up-front where you’ve got Craig Matthews‚ and Ayanda Patosi is also doing well.

“They are a complete side now‚ so it’s not going to be an easy game. We really need to perform to get a result against them.”

City‚ in their third season of existence since John Comitis bought Mpumalanga Black Aces in May 2016 and relocated the team to Cape Town‚ have a strong all-round lineup this season.

Tickets will be available at Ticketpro and Spar outlets nationwide!!!

If SuperSport prepare to subdue unpredictable Patosi – scorer of a brace to earn City a 2-2 away draw against Orlando Pirates last week – midfielder Thabo Nodada‚ veteran Teko Modise or even anchor Roland Putsche are as capable of match-winning performances.

“They’re a difficult team to play. We do plan for individual players. But what’s important at the same time is their structure‚” Tembo said.

“But we know what Patosi can do on set plays. His deliveries are very good. And Nodada is very hard working. His pressing is very good.

“So those are some of the things that we are aware of individually. But the most key thing for us is their structure.”

SuperSport have in-form attackers of their own capable of unlocking City‚ with Evans Rusike and Bradley Grobler having scored three goals in all competitions‚ and James Keene a brace in their 4-0 league win at home to Black Leopards on Sunday.

Matsatsantsa have had the better start to the season in the Absa Premiership‚ where they are in fifth place from four wins and two defeats.

City are in 11th after one victory‚ three draws and a loss.

Cape Town City’s goal hero Ayanda Patosi says he is not 100 percent certain of success in this Saturday’s MTN 8 final but rather “150 percent” sure ...
Sport
2 years ago