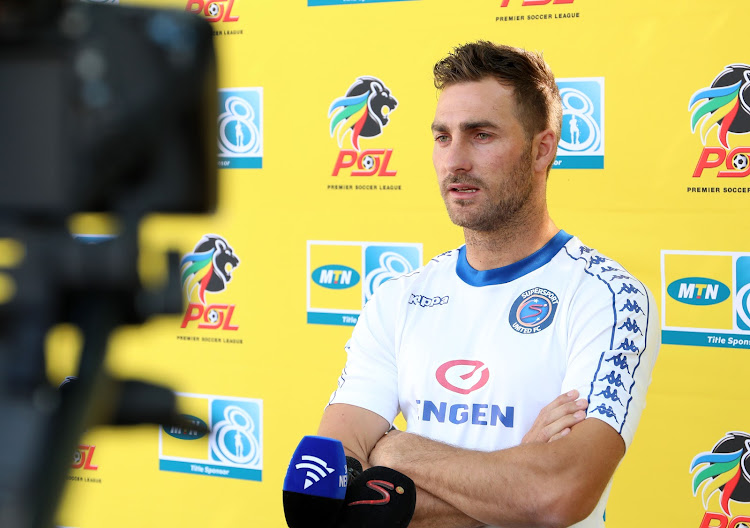 SuperSport United and Bafana Bafana striker Bradley Grobler speaks to the media during the MTN8 final media day at the club's training base at the Megawatt Park, Johannesburg on 26 September 2018.
Image: Muzi Ntombela/BackpagePix

The Pretoria team have met City in two cup finals in the past two seasons‚ losing 2-1 in the 2016-17 Telkom Knockout and winning on penalties in last year’s MTN8 at the same venue.

SuperSport have been in better form at the start of the 2018-19 season‚ and Grobler said his team will not shy away from the often dreaded billing as favourites.

“I think the team has done extremely well at the start of the season if you compare it to where we were last season‚” the Bafana Bafana forward said.

“We’ve put up a few good performances and obviously want to defend our trophy. And‚ ja‚ I think we’re happy to go into the final as favourites.

SuperSport‚ who at times fought relegation last season and only snuck into the top eight via the boardroom‚ have looked refreshed unencumbered by continental football this campaign.

Last season they reached the Caf Confederation Cup final‚ losing against TP Mazembe‚ which took a toll on their domestic form.

“The Caf was a good journey‚ we enjoyed it‚ we miss it‚” Grobler said.

“But at the same time it does make the league a lot harder for you. Fortunately enough this year we’re not going to be travelling in Caf.

“I think it’s going to help us. But at the end of the day we also want to be playing in Caf again‚ so we’ll try and qualify for it as well.”

SuperSport do appear to be slight favourites on Saturday. They won the last cup final between the teams‚ albeit on penalties‚ in the same competition at the same venue last year‚ and are defending champions.

Matsatsantsa are in fifth place in the league with four wins from six‚ City are in 11th from one win and three draws.

SuperSport won their last game 4-0 at home against Black Leopards on Sunday. City lost 4-1 at home to Kaizer Chiefs‚ then drew 2-2 away against Orlando Pirates‚ coming back from 2-0 down‚ in their last two games.

Grobler was adamant that his confidence was not overconfidence.

“No‚ look. We are very confident – we’re not overconfident‚” he said.

“As much as the results that have come in the past are not really going to influence the game‚ it does create a huge morale booster for us.

“We’ve been scoring a lot of goals. We’ve got a lot of players scoring goals‚ which‚ as a striker‚ is already a confidence booster.

“We’re in a good position right now. Just as long as we go out there and do the job.”

There is almost no chance that Tokelo Rantie will emerge as a surprise package for Cape Town City in Saturday’s MTN8 final as his intensive training ...
Sport
2 years ago

Bloemfontein Celtic’s beleaguered and broke owner Max Tshabalala has asked the Premier Soccer League (PSL) for money to help pay his players and ...
Sport
2 years ago

Percy Tau’s good form in Belgium this season continued as he helped his second-tier club to a stunning cup upset at top side Anderlecht on Thursday ...
Sport
2 years ago