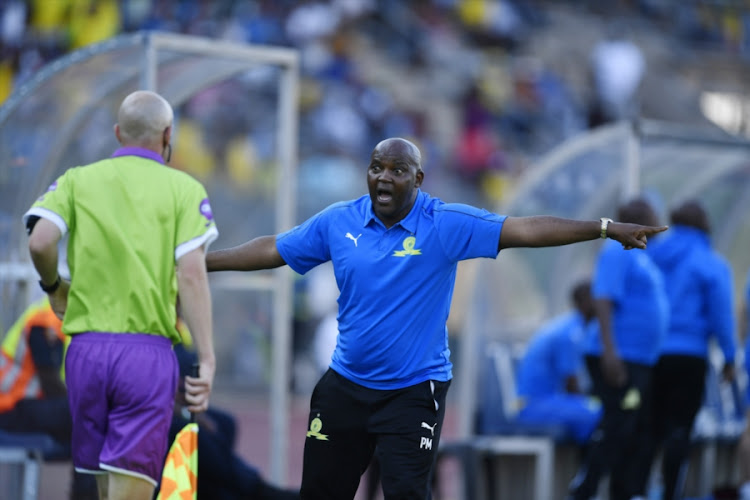 Mamelodi Sundowns might be the only unbeaten club left in the Absa Premiership but for coach Pitso Mosimane that means nothing.

“What are we going to do with unbeaten?” he asked after Sundowns drew for a fifth time this season when they were held 1-1 by log leaders Bidvest Wits at the weekend.

“You play 30 draws and you sit on 30 points‚ you are relegated! 30 points is relegation!

“You didn’t lose‚ we clap hands for you but you are relegated. You can be unbeaten and still be at the bottom of the log.

“So that’s why I always say if you gave me the option of three goalless draws‚ I’d rather take one win of 2-0 and lose the other two matches. At least then I’ve got two goals.

“What am I going to do with this unbeaten record? Does it help me? It’s only decoration‚” said Mosimane.

Sundowns have gone through their first seven matches of the new league season without losing but sit with 10 points in seventh place‚ six points behind log leaders Wits‚ albeit with two fixtures in hand.

“There have been too many draws‚ that’s right‚ but some of them we should have converted into wins‚” the coach added.

The best start to a domestic league season came 27 years ago when Kaizer Chiefs won 17 games on the trot from the start of the 1991 season and‚ understandably‚ went on to clinch the title.

They started away in Durban by beating Manning Rangers 4-0 and continued the run for just over five months before an away draw at Bloemfontein Celtic ended the streak.

They still remained unbeaten for a further five games‚ their run ending in their 23rd match of the season when Sundowns beat them 2-1 at the HM Pitje Stadium.

Pitso Mosimane might be feeling the world is against him right now but has made an emphatic prediction that has been lost amid the complaints against ...
Sport
3 years ago

Pitso Mosimane says champions Mamelodi Sundowns are always getting the short end of the stick as he bemoaned another refereeing decision that went ...
Sport
3 years ago