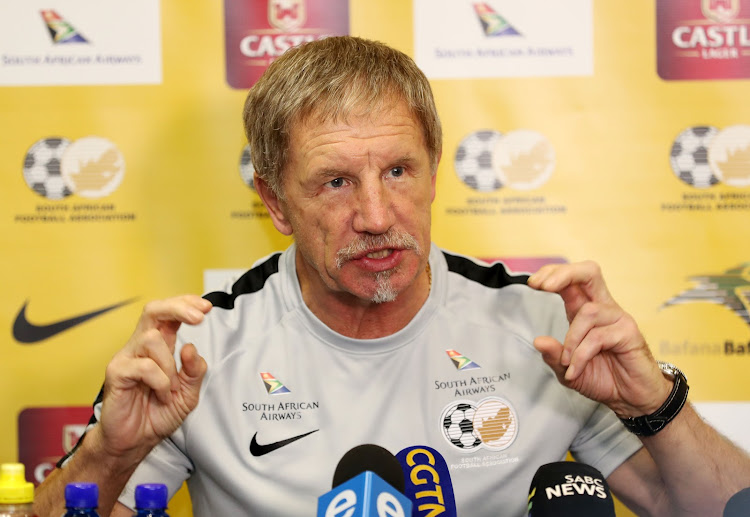 Stuart Baxter will not be allow his mind to stray to the results of the matches between Nigeria and Libya when Bafana Bafana meet Seychelles in Africa Cup of Nations qualifiers on Saturday and Tuesday.

Bafana‚ on four points and in second place on goal difference from Libya‚ can go to 10 points and put themselves in the driving seat in Group E beating 189th-ranked Seychelles at FNB Stadium on Saturday‚ then in Victoria on Tuesday.

The best-case scenario for South Africa is that Nigeria and Libya cancel each other out over their two games on the same days. Nigeria host Libya in Kaduna on Saturday‚ then the second game is played in Sfax‚ Tunisia on Tuesday.

Baxter was asked if he would hope to see the other results in Group E games going Bafana’s way as they meet Seychelles.

“You can ask me that question after we’ve played the game‚ because I don’t want any modicum of my being to be somewhere else than at the FNB Stadium when we’re playing Seychelles‚” the Bafana coach said after his team’s final training session at FNB on Friday.

“So I understand your question‚ and it would be very nice [other results going Bafana’s way]. But that’s nothing we can control‚ so let’s control what we can and then we’ll move on.

“We’ll take what we can get from there and then we’ll see what sort of challenges we have in the future.”

If Nigeria can beat Libya in one game to go to six points‚ then Libya win the other to go to seven‚ and Bafana beat Seychelles twice‚ SA‚ on 10 points‚ would need a draw from their last two games to ensure qualification for Cameroon 2019‚ or for Nigeria to drop a point.

Bafana meet Nigeria at home on November 16 and Libya away in March next year in their last two fixtures.

If Nigeria and Libya‚ whose coach Adel Amrouche quit this week‚ draw both games they will be on five and six points respectively‚ and Bafana would still need a draw‚ or not even that‚ depending on other results.

If Nigeria win both games they can got to nine points‚ and Libya would be stuck on four‚ meaning Bafana would still need a point‚ or for Libya to drop one.

If Libya beat Nigeria twice‚ and Bafana win twice against Seychelles‚ SA and the Mediterranean Knights will progress and the Super Eagles will be eliminated with two games to go.