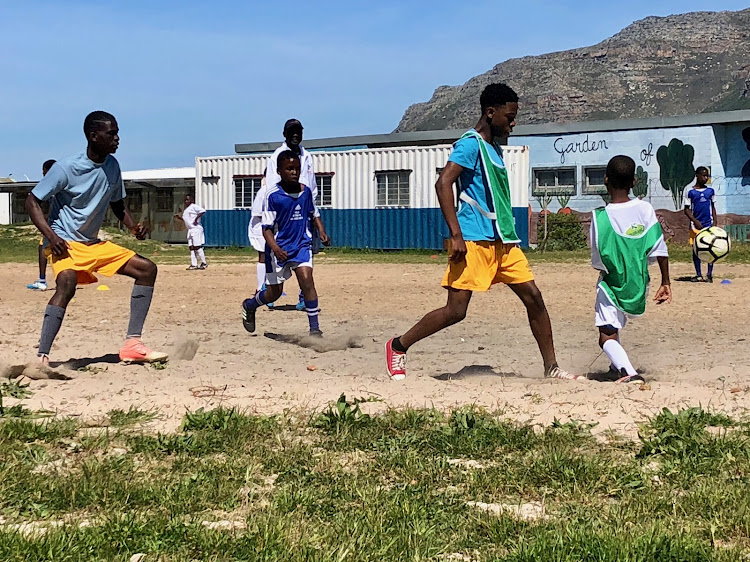 Cavin Muodzi says the Harvest Soccer Academy, which he started in 2016, aims to get children off the streets and nurture them to be professionals players.
Image: Tariro Washinyira

A 24-year-old Zimbabwean has co-established a soccer academy in Capricorn (an area near Muizenberg on Cape Town's False Bay coastline).

Cavin Muodzi says the Harvest Soccer Academy‚ started in 2016‚ aims to get children off the streets and nurture them to be professionals players.

Muodzi says his mother didn’t support his football dreams. She wanted him to pursue an academic career. But that didn’t stop him from dreaming. Now he would like to live his dream by helping children in a similar situation.

“Their parents are forcing them to major in academics when they are talented football players‚ who may end up playing for professional teams. One of the children is already nominated to represent the Good Hope League‚” he says.

Muodzi plays for a club in Milnerton. He funds the academy with his wages‚ which is mostly tips‚ from a job as a waiter at a restaurant in Kalk Bay.

Harvest Church‚ of which he is a member‚ also assisted‚ as have some schools. The church helped register the project as a non-profit organisation.

Operating from Capricorn Primary School‚ the academy uses the school sports field and equipment for free.

The academy has 43 youngsters in three age groups: Under 12‚ Under 14 and Under 16. Every Saturday they play a league in Hout Bay. During the school holidays‚ they train between 10am to 1pm. On school days they can’t use the sports field as the school uses it. On weekdays‚ they meet for one hour. Transport is also a problem.

Muodzi is mentored by Zimbabwean soccer player Hilton Masunda‚ who coaches the Under 12 team at the academy. A qualified coach‚ he works for St Joseph’s Marist College in Rondebosch where he coaches Under Seven and Under 19 boys and girls. He came to Cape Town in 2008.​​​​​​​

Masunda says he started playing soccer at seven. He says his father coached players in Zimbabwe such as “Silver Fox” Wilfred Mugeyi.

Aluta Sidinana‚ 15‚ in grade 8 at Heathfield High School‚ was one of the first to join. “When we started we had nothing and we were about eight children. There are also many children who still want to join but there is no space. We trained at an abandoned‚ dangerous field‚ terrorised by gangsters in Seawinds‚” he says.

Aluta says‚ “I didn’t know the purpose of my life until I came to this academy. It helped me know that this is the thing I would like to achieve in life. My goal is to become a best football player in the world. My dream team is Real Madrid.”

He says his mother told him he is going to be disappointed when his dream fails. But she is supportive.

Yibanathi Joji‚ 15‚ of Muizenberg High School‚ says‚ “My parents are happy that I am off the streets and being a good example to my young brother. I now come home early‚ do my homework on time‚ don’t smoke and am obedient to my parents.”

Last week‚ parents attended the academy’s award ceremony and were happy with its work.

Muodzi is however still short of basic equipment. “We are only training with four soccer balls at the moment . . . With drills every child is supposed to have his own ball. We would also love to have a kit for each child so that when they come for training they don’t wear their own clothes‚” he says.

Some of the training kits are missing items; many tops are not even numbered. The few uniforms they have are taken to the laundry after training and kept at the academy. His goal is to have water bottles for every child and kit labelled Harvest Soccer Academy.​​​​​​​ Muodzi says they also need a First Aid kit.

“We also want to . . . work with other communities in the Western Cape and at national level mentoring‚ coaching and scouting for children. We also want to visit disadvantaged children and orphans who never had an opportunity to play soccer‚” says Muodzi.