What Baxter told Bafana so they don’t underestimate Seychelles 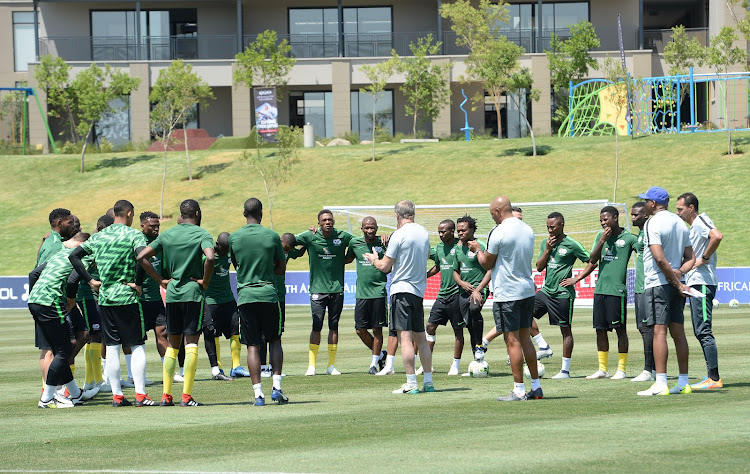 Bafana Bafana coach Stuart Baxter and his assistants in a discussion with the player during a training session at Steyn City School in Fourways, north of Johannesburg, on October 9, 2018. SA take on Seychelles in the 2019 Africa Cup of Nations at FNB Stadium in Soweto on Saturday October 13 2018.
Image: Samuel Shivambu/BackpagePix

If Bafana Bafana had beaten Libya in their previous 2019 Africa Cup of Nations qualifier‚ then the South Africans probably would just have been looking for a win on Saturday in their next game against Seychelles.

Instead‚ having disappointingly drawn 0-0 against Libya at Moses Mabhida Stadium last month‚ Seychelles seem set to encounter a Bafana in uncompromising mood to put matters to rights‚ play up their 189th-ranked opposition to more than what they are‚ and go out for a big win.

Bafana have trained with an intensity this week in preparation for Seychelles that might have been less for the Indian Ocean islanders had the South Africans earned a winning result against Libya.

Dare one say it‚ perhaps the same intensity was lacking in Durban for Libya‚ too.

Coach Stuart Baxter was asked what message he has drummed into his team to ensure they do not fall into the trap of overconfidence for a game that they should win‚ with due respect to Seychelles‚ with one eye closed.

“We don’t usually discuss what we talk about. But I think this is so obvious that it’s OK‚” the coach responded.

“I said to the players last night when we were doing the presentation: ‘Look what’s written right in the middle. It says‚ Afcon qualifier’.

“‘And an Afcon qualifier is the second-biggest tournament that you can play in [after the World Cup]’.

“And if that’s not enough for you that when you started playing football as a kid‚ and you wanted to play in major tournaments … ’.

“‘Have we come this far so that you can just take it with a pinch of salt‚ or do you want to represent you and your country and your team in the correct way?’

“That’s been the message all week. What do we do? Value what you do‚ try and do it with excellence‚ go for the best you can be‚ and don’t settle for anything less.”

Seychelles‚ part-timers from a tiny island archipelago with a population of less than 100,000 that has no professional league‚ will surely wilt in the face of an approach of intensity from their Southern African big brothers.

Bafana have trained with what seemed a higher tempo this week‚ seemingly with that in mind.

“I think the intensity in training has reflected the thoughts and the desires of the players and the technical staff‚” Baxter said.

“And I think if we can reproduce that we can not only give Seychelles a tough game‚ we would give most people a tough game.”

Bafana‚ in second place on goal difference from leaders Libya on four points‚ can go to 10 points and the Group E driving seat with back-to-back wins against Seychelles at FNB‚ then Stade Linite in Victoria on Tuesday.