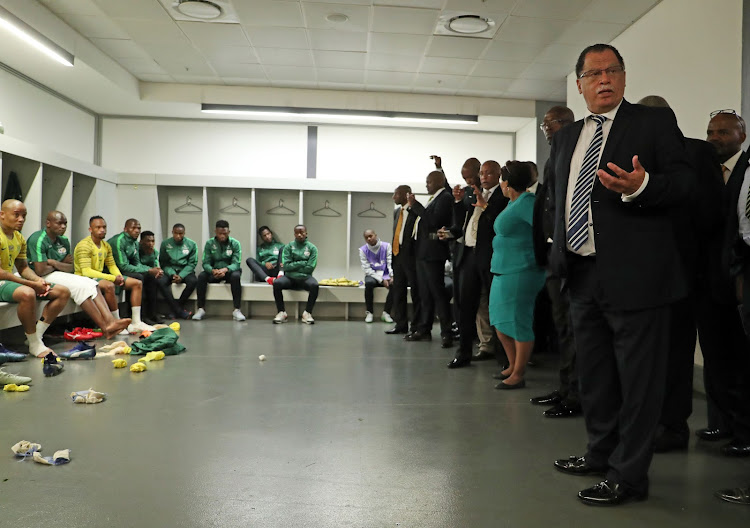 The SA Football Association (Safa) has accused the SABC of mounting a disinformation campaign surrounding the stalled new broadcast agreement for Bafana Bafana matches between the two.

Paul said that SABC chief operating officer Chris Maroleng had made several misleading statements online and on radio as to why Bafana's 6-0 2019 Africa Cup of Nations qualifying thrashing of Seychelles on Saturday had not been televised on the public broadcaster.

Paul denied an apparent allegation by Maroleng that SABC trucks had turned up at FNB Stadium and been turned away.

"We saw a Tweet‚ somewhere along the lines‚ and I think attributed to the COO [Maroleng]‚ that the SABC sent their trucks to FNB Stadium for this match and their trucks were turned away‚" Paul said.

"The first issue that we fail to understand is why the trucks were allegedly sent to FNB when SABC don't have a contract. The SABC themselves are the ones who say‚ 'No contract‚ no game'.

"So why would they send their trucks if they did not have a contract. Allegedly sent their trucks‚ I might add.

"Secondly‚ both ourselves and Stadium Managament [the company that oversees FNB Stadium] have checked - and we know the stadium - and there was never an SABC truck that was at the stadium and turned away. There were one or two cars that were there but never an OB [outside broadcast] truck.

"In any event‚ had they pitched there we would have turned them away. But they were never there."

Paul continued: "We note that the COO of the SABC was online saying that Safa had made demands that were 10 times more.

"That is untrue. If anything the SABC is offering to pay us 11 times less than what they paid us before. And that's something that the record needs to show."

He added: "We recognise that the South African public has been denied the opportunity of watching their beloved Bafana Bafana. We empathise with them.

"But I think they must also understand that there's a case to be made over here."

A Tweet that Paul was apparently referring to quoted Maroleng as saying: “We had already deployed our outside broadcasting van to FNB stadium and we did this in good faith‚ anticipating we would be able to broadcast. However Safa denied us access to the venue and we have returned our equipment to our headquarters.”

The statement was apparently made on radio.

Stuart Baxter will not be allow his mind to stray to the results of the matches between Nigeria and Libya when Bafana Bafana meet Seychelles in ...
Sport
3 years ago

Bafana bump Seychelles off their own aeroplane

Bafana Bafana have bumped opponents Seychelles off their own plane and will be flying direct to the Indian Ocean island on Sunday‚ while their hosts ...
Sport
3 years ago