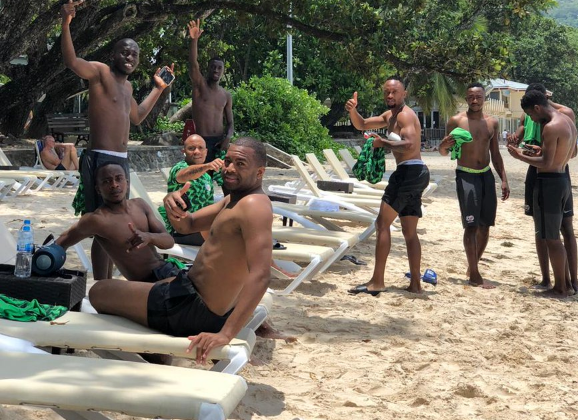 Bafana Bafana players take the time out to relax on a beach in Seychelles ahead of their crucial 2019 Africa Cup of Nations qualifying match against islanders.
Image: Bafana Bafana/Twitter

The Bafana Bafana Twitter account’s decision to post pictures of the players frolicking on the beach in Seychelles this week has become a nightmare after the 189th-ranked islanders managed to hold coach Stuart Baxter’s misfiring charges to a potentially costly goalless draw on Tuesday.

Irate fans took to social media after the result and argued that Bafana underestimated Seychelles after beating the Indian Ocean islanders 6-0 in the first game at FNB Stadium a few days ago.

“First of all‚ we know we let ourselves down. It was a good opportunity to go to ten points (in Group E) and you know that you are fully in control‚” Mphahlele said.

“I mean‚ we came here hoping to win the game‚ but it wasn’t to be.

‘‘We gave everything and we didn’t underestimate them. We didn’t show bad attitude‚ so we gave it everything.”

But in the same breathe he struggled to escape from reality after Bafana fluffed their chances against a country represented by 98% of part-time footballers‚ with just a couple having professional contracts with local teams.

“It was difficult to play the way we wanted to and it was a bitter pill to swallow‚ because we know that we could have won the game.

‘‘We created chances‚ but we failed to score‚” said the Limpopo-born player.

“It’s a setback‚ but it’s not a train smash. We must go and beat Nigeria at home. It’s not going to be easy.”

Relaxing ahead of the big game here in Seychelles. Bafana Bafana play Seychelles on Tuesday at 15h30 pic.twitter.com/tvjItwOyeN

Overall‚ it was a disappointing performance from the team and Mphahlele isn’t shy to admit that Bafana let the nation down.

Nigeria are now in the driving seat after beating Libya 3-2 on the day to go top of the group with nine points from four outings and SA are now second with eight‚ with Libya sitting on four and Seychelles on one‚ the point they got from Bafana.

Bafana face Nigeria at FNB Stadium on November 17 and once again‚ they’ve just made life difficult for themselves.

Relaxed Bafana Bafana take in the sights in Seychelles

Such is the relaxed nature of Bafana Bafana's approach to their 2019 Africa Cup of Nations (Afcon) qualifier against the Seychelles that beach trips ...
Sport
3 years ago