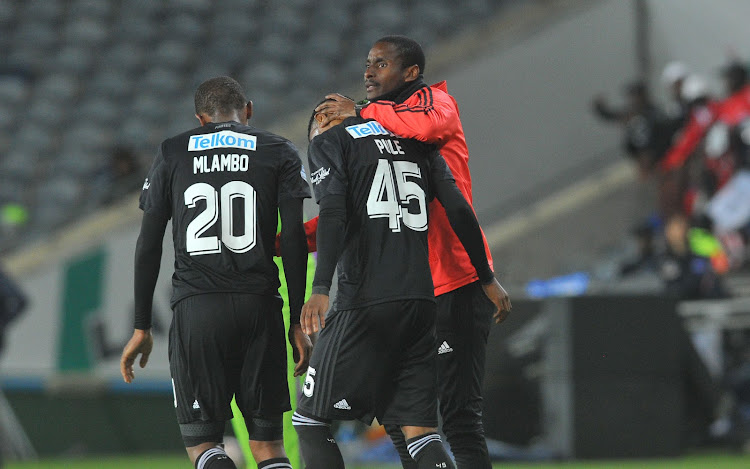 Vincent Pule of Orlando Pirates celebrates a goal with teammates during the Telkom Knockout Last 16 Orlando Pirates and Chip United on the 20 October 2018 at Orlando Stadium, Johannesburg.
Image: Sydney Mahlangu/BackpagePix

Orlando Pirates had to negotiate their way past a prickly Chippa United to reach the Telkom Knockout quarterfinals, and did so effectively enough with Saturday night's 1-0 last-16 victory at Orlando Stadium.

Neither side could edge a clear domination in a gratingly edgy opening half.

Thabo Rakhale had the first shot in anger against his old team for Chippa, with a drive from the edge of the area that was very well high over the crossbar.

In the 36th minute Augustine Mulenga produced a characteristically bullish run into the area and was dispossessed, Justin Shonga taking the loose ball, turning and shooting for Daniel Akpeyi to produce a fine diving one-handed save.

Perhaps the most eventful occurence of a dull first half was Chippa coach Eric Tinkler, after giving his left wing captain Mark Mayambela a mouthful, substituting him three minutes before the break with Daine Klate.

Pirates also made an early substitution, Pule replacing Mulenga coming back from the change rooms.

The second half saw the football open up to a far greater extent.

Tinkler responded by bringing on Rhulani Manzini for Kurt Lentjies. Almost immediately the big centre-forward teed up Ruzaigh Gamildien, who in turn fed Tercious Malepe on the right, who fired wide.

The chances were coming, and someone seemed likely to score. It was Pule for Pirates.

Bucs on the counterattack fed Xola Mlambo to the right goalline who cut the ball back for Pule, ghosting in at the near post, to finish past Akpeyi.