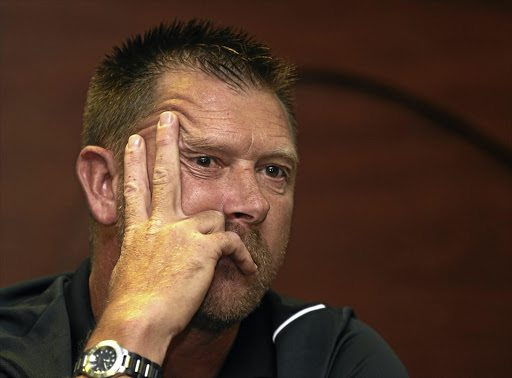 Chippa United coach Eric Tinkler would only say that he "did what I felt was necessary"‚ explaining his first-half substitution of captain Mark Mayambela in Saturday night's 1-0 Telkom Knockout loss against Orlando Pirates.

Tinkler said the reason for Mayambela's substitution‚ being replaced by Daine Klate in the 42nd minute‚ should have been obvious to anyone viewing the game.

Mayambela was taken off after the former Pirates' winger had angrily responded with a wave of his arm at his coach.

This followed Tinkler having given left wing Mayambela a mouthful for being caught out of position on a Buccaneers attack.

Tinkler was supposed to be the first coach to attend the post-match press conference‚ but took so long with his team in the change rooms after the game that Pirates' coach Milutin Sredojevic ended up going first instead.

"You didn't see why? Surely it's obvious‚" the coach responded‚ when questioned on why he took Mayambela off.

"But it's an internal matter. And that will be dealt with internally.

"But it was more than obvious. This is the biggest game on TV this weekend. Everybody across the country is watching Pirates. And you can't behave that way.

"So I reacted to it. I did what I felt was necessary. But it will be dealt with internally."

Mayambela later took to Twitter to apologise for gesturing at his coach.

I would like to apologize to everyone for the incident that happened in tonight’s game. I shouldn’t have reacted the way I did,it doesn’t matter how frustrating the situation was. I hope you will receive my humble apology well❤️🙏🏽

Mayambela's substitution came in a first half where Tinkler was not happy with his team's performance overall.

"We had planned to press Pirates‚" Chippa's coach said.

"But we have played against other teams who have played in a 4-3-3. So the whole plan was to look to press them and we didn't do that in the first half.

"Both Kurt Lentjies and Ruzaigh Gamildien were looking to press onto their centrebacks. It was too easy for Pirates to get the ball to Musa Nyatama.

"And then they started coming at us and turning us‚ and creating little spaces in-between the lines. Which was something we practised and we allowed that to happen in the first half.

"I thought in that first half we looked like we were playing with fear.

"So obviously we had to make changes at half time. And I thought the second half was a vast improvement. We made better decisions on the ball and our pressing was a lot better.

"How we conceded the goal was a bit disappointing‚ being beaten at the near post. But the way the team reacted was extremely positive.

"We got into the right areas but players have to understand that in those areas you have less time. And we wanted too many touches in those areas.

"But overall the second-half performance was good‚ first half not great."

Pirates took the lead in a period where the teams were matching each other chance for chance‚ when Xola Mlambo was fed into space on the right and cut back for substitute Vincent Pule to finish at the near post.

Not that there was ever any doubt‚ but it has been confirmed that South Africa are among the 12 countries who have the right to enter two rather than ...
Sport
3 years ago

Kaizer Chiefs’ remaining strikers have one goal in 27 games

Domestic football returns this weekend with the first round of the Telkom Knockout as the second piece of silverware is up for grabs this season.
Sport
3 years ago