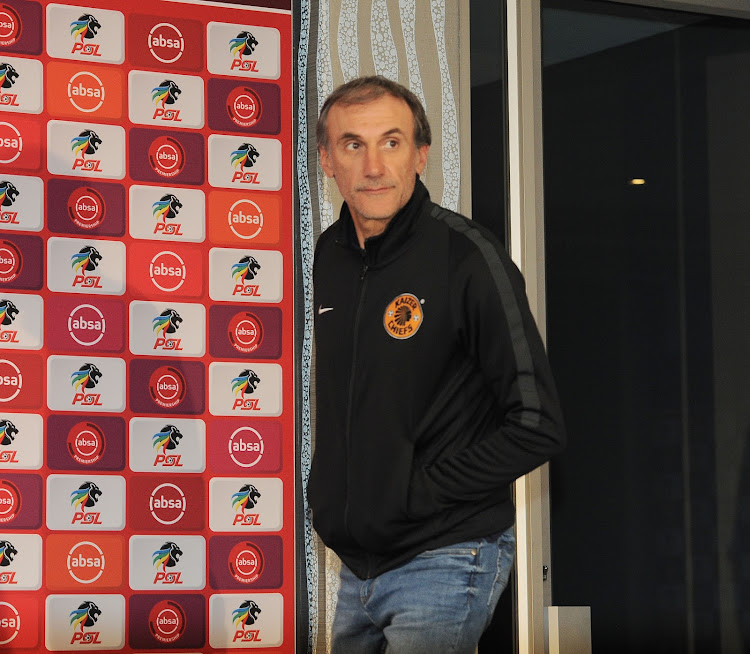 Kaizer Chiefs are in a race against time to get key players fit for the weekend’s Soweto derby after they limped over the line against Black Leopards on Sunday without six regulars.

Khama Billiat‚ Daniel Cardoso‚ Leonardo Castro‚ Lebogang Manyama‚ Siyabonga Ngezana and Dumisani Zuma were all absent as Chiefs needed post-match penalties to see off a gallant challenge by Leopards in the first round of the Telkom Knockout at FNB Stadium.

“I hope some of these players can recover for the derby and I think so.

“Zuma could make it. He’s a young player but very talented and he’s keen for action.

“We have to get them back because the derby is a special game‚” he said as Saturday’s sell-out spectacle looms.

"It’s special for the supporters too‚ so we have to be well prepared. It will be very difficult because Pirates have good players‚ a fantastic coach and they are playing well.

“But Chiefs also have good players. Maybe not a good coach but good players‚” he joked at his own expense.

Solinas betrayed some emotion after the drama of the cup win as Chiefs came from behind to scrape through and keep alive their hopes of ending their long trophy drought.

“I knew it would be a tough game for us especially without the six key players‚" he said.

"We lost all our key players in the attacking department‚ all at the same time.

"This was no good. Maybe you can change one or two players and still keep your structure‚ but this bad luck has not ended for Kaizer Chiefs. It is unbelievable.”

Solinas made seven changes for Sunday’s game in the wake of Castro’s ankle injury‚ Manyama breaking an elbow in a car accident last week and Billiat suffering a back injury on international duty with Zimbabwe.

“I was wary of Black Leopards‚ especially because I know that teams who come up from the NFD always play with an energy and an enthusiasm‚" he said.

"If I analyse the game‚ I was not happy with the first half. We didn’t play our football but rather with a lot of confusion and no clear idea.

"When we lost the ball‚ the team was not compact.

"We were stretched‚ and Black Leopards exploited the space very well.

“But we fixed this problem at half-time and we moved the ball in different manner and in the second half and in extra time‚ my players played very well.

“I appreciated the team spirit‚” he said looking mightily relieved to advance to next month’s quarter-finals.

Kaizer Chiefs needed a penalty shootout to beat Black Leopards to advance to the quarterfinals of the Telkom Knockout and keep up their hopes of ...
Sport
3 years ago

It is a miracle that Lebogang Manyama survived his car accident‚ Kaizer Chiefs coach Giovanni Solinas has said‚ while pleading with fate for the ...
Sport
3 years ago