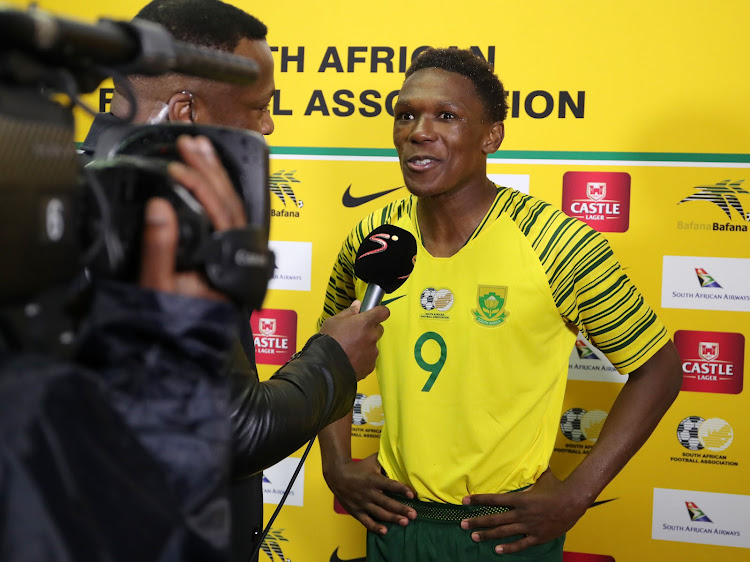 Bafana Bafana France-based striker Lebo Mothiba collects his man of the match award after a splendid display for South Africa during the 2019 Africa Cup of Nations qualifying match against the Seychelles at the FNB Stadium in Johannesburg on October 13, 2018.
Image: Muzi Ntombela/BackpagePix

Lebo Mothiba has kept up his excellent scoring form for French Ligue 1 side Racing Strasbourg with what proved the winner in a 2-1 success over Monaco at the weekend to spoil the party for Thierry Henry.

The match was a first as a head coach for the former France and Arsenal legend‚ but he watched as young gun Mothiba came off the bench to net a second for his side in fine style.

Mothiba was sent clear on goal and provided a cool finish to chip the goalkeeper and keep up his remarkable run of form.

It was a fifth goal in seven appearances for Strasbourg‚ three of those from starts‚ and took his overall tally to six goals in 10 appearances if you include the three matches he played for Lille in August.

It pushes Mothiba closer to achieving his goal of beating last season’s goals tally of 16 for club and country‚ with the 22-year-old already on seven if you include his strike against Seychelles earlier this month.

“I am here to help the club to stay in Ligue 1 first‚ because you know it is their second year in the top league‚” Mothiba told TimesLIVE in Strasbourg.

“I want to make everybody happy‚ the players‚ the fans‚ the coach‚ but for me as a striker when the team buys you‚ it means you have to score goals.

“I would like to beat my total last season‚ which was 16 goals when you count the goals I scored for Valenciennes‚ Lille and the national team.

"I am working hard to do the same thing this season at my new club.”

The win moved Strasbourg up to seventh position in Ligue 1 and leaves Mothiba just three goals off the leading scorer in the league‚ Paris St Germain sensation Kylian Mbappe.

He is also just two behind Brazilian Neymar and ahead of the likes of Edison Cavani and Radamel Falcao.

Stuart Baxter must go. Enough excuses. That is where we are. Klaar.
Sport
2 years ago

Lebogang Mothiba’s three goals in his first three games – a first that not even Benni McCarthy‚ Shaun Bartlett or Phil Masinga managed – the class of ...
Sport
2 years ago

Lebo Mothiba created a piece of Bafana Bafana history for himself

Exciting young striker Lebo Mothiba created a piece of Bafana Bafana history for himself at the weekend when he became the first player to score in ...
Sport
2 years ago