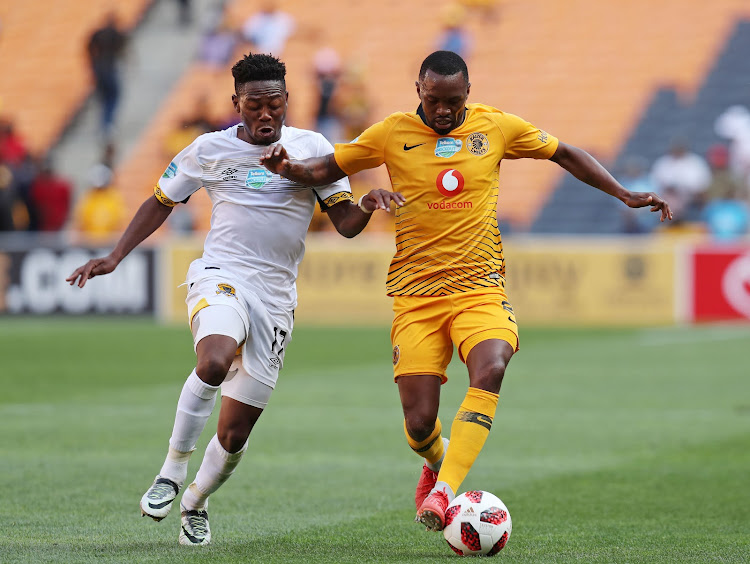 Kaizer Chiefs striker Bernard Parker shields the ball away from Lifa Hlongwane of Black Leopards during the Telkom Knockout Cup match at the FNB Stadium in Soweto, south west of Johannesburg, on October 21, 2018.
Image: Muzi Ntombela/BackpagePix

Bernard Parker used his man of the match acceptance interview on television to ask Kaizer Chiefs supporters not to abuse the players.

The former Red Star Belgrade forward followed it up with another passionate appeal on Twitter.

Parker’s comment were unsolicited after Chiefs had scrapped through the first round of the Telkom Knockout over Black Leopards at FNB Stadium on Sunday‚ and where there were no obvious signs of any bullying of the Chiefs players by the home fans.

But both Parker and fellow veteran Siphiwe Tshabalala were subjected to abuse earlier in the season when Chiefs made a poor start to the season.

While it might have been a factor in shaping Tshabalala’s desire to move to new vistas in Turkey‚ the abuse has obviously gnawed away at Parker over the last months and he wasted no time using the platform of SuperSport television to appeal to the Chiefs supporters to stop abusing players.

Parker repeated it then on Chiefs’ official twitter feed‚ saying to camera: “Thank you to everybody associated with his badge‚” while tugging at his shirt.

“Guys‚ please be with us every time we are on the field of play.

"We ask that you encourage us‚ that you support us‚ we want you to push us‚ to give us that extra effort to push so that we can win together.

“We win together‚ we lose together and we draw together‚” he added.

Parker’s appeal follows a discourse on Saturday after Orlando Pirates beat Chippa United when both coaches again bemoaned the poor finishing of strikers in South Africa but said the public must share some of the blame.

Chippa coach Eric Tinkler said the jeering of the crowd at players like Thamsanqa Gabuza made them nervous to take shots at goal and this led to uncertain decision-making in front of goals.

Kaizer Chiefs and Orlando Pirates resume their rivalry when the two most popular sides in southern Africa face off in the Absa Premiership at FNB ...
Sport
3 years ago