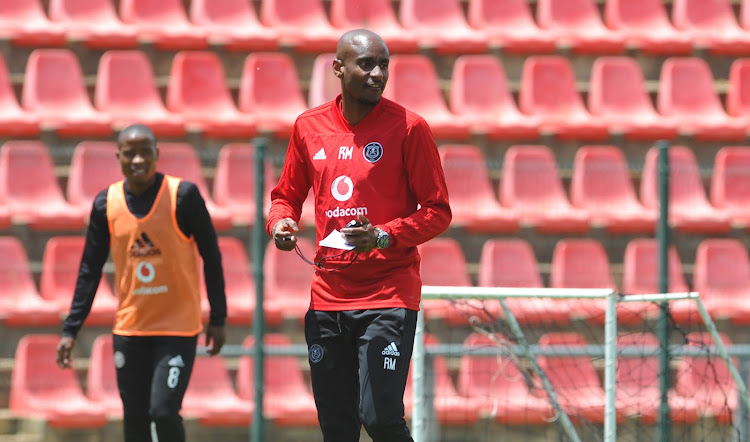 Orlando Pirates’ assistant-coach Rulani Mokwena has broken down the way Orlando Pirates see Kaizer Chiefs as playing‚ and how they see Amakhosi defensive midfielder Willard Katsande as the key cog in that game plan.

Mokwena‚ one of the brightest prospects in SA football coaching‚ revealed a respect for the manner in which Chiefs coach Giovanni Solinas has rotated his players ahead of Saturday’s sold-out first Soweto derby of the season in an Absa Premiership match up at FNB Stadium.

Chiefs had some nervous moments‚ but ultimately the Italian was able to get away with it as Amakhosi managed to progress to the quarterfinals 4-2 on penalties after a 1-1 result by the end of extra time.

“Without revealing too much‚ we’ve already started our work on Chiefs‚” Mokwena said.

“The Fifa break gave us an opportunity to start our analysis a couple of weeks ago.

“The one thing about Chiefs is that the coach [Solinas] has been extremely smart in how he uses his squad.

“He uses Emmanuel Ntiya-Ntiya [at left-back]‚ then he uses Godfrey Walusimbi.

“The two centrebacks are not always the same. It’s [Siyabonga] Ngezana‚ then at times you’ll find Mario Booysen‚ at times Daniel Cardoso and at times [Mulomowandau Mathoho.

“There’s not a lot of rotation that happens in the midfield. Willard Katsande is always the focal point and an important part of the axis‚ and the foundation of the team.

“A very matured player. A very important player for them.

“He’s important for the phases of the game‚ because even though they change the lineup‚ the game model and the way they behave on the pitch remains the same.

“You will always find the goalkeepers initiating the buildup phase. You will find the centrebacks splitting‚ full-backs trying to be as high as possible.

“And they want to build from the back‚ and that’s where they actually are the most dangerous.

“Because when they want to start from the back‚ they want you to come and initiate a high press so that they can get the ball behind for runners like Khama Billiat.

“And the person to do that is Katsande. He needs no more than one touch to be able to deliver the ball to Khama.

“Because as soon as they get the ball from there‚ then there’s the second phase of the attack that involves Siphelele Ntshangase and Hendrick Ekstein‚ and even Dumisani Zuma.

“You saw that against Leopards – how important Bernard Parker is with his experience and his ability to make the right decisions at the right time.

“So we’ve done our work. We will continue to dig deeper and make sure that we leave no stone upturned.”

Pirates are in second place from four wins‚ four draws and two defeats going into the derby. Chiefs are in third from three wins‚ five draws and two losses.

Kaizer Chiefs and Orlando Pirates resume their rivalry when the two most popular sides in southern Africa face off in the Absa Premiership at FNB ...
Sport
3 years ago