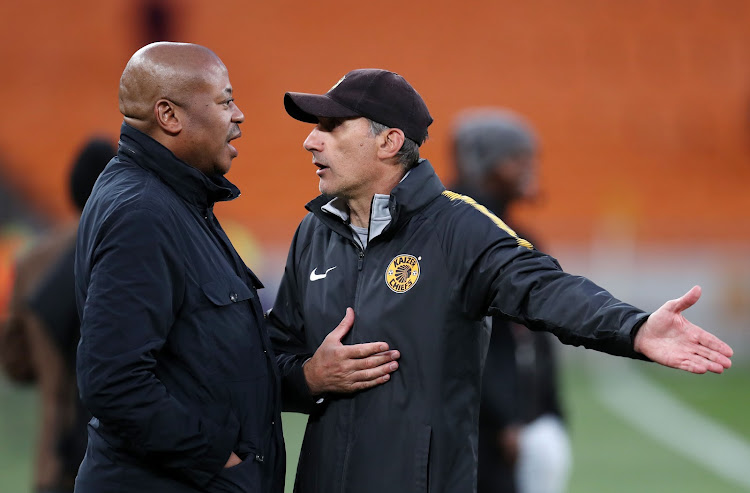 Kaizer Chiefs Football Manager Bobby Motaung in a discussion with head coach Giovanni Solinas during the Telkom Knockout match against Black Leopards at the FNB Stadium in Johannesburg on October 21, 2018.
Image: Muzi Ntombela/BackpagePix

A full house of more than 90‚000 supporters watched an entertaining Absa Premiership matchup where Chiefs took the lead through Khama Billiat in the 15th minute‚ but Pirates powered back through goals by Innocent Maela (29th) and Vincent Pule (32nd).

"After that [in the first half] we lost concentration. We lost the distances and defensively it was soft.

"In the second half the guys performed very well. We created the chances.

"But congratulations to Pirates for winning this derby. And apologies to our supporters because when you have lost the derby it's painful.

"The guys put the effort up to the last minutes trying to score‚ trying to equalise‚ trying to not lose this derby.

"OK‚ this is football. I think in the second half the performance was positive‚ and now we need to understand why we lost the concentration after we scored [in the first half].

"And we need to continue to play because this is football‚ and in the derby the details make the difference.

"But we will take the lessons from this derby. And we need to improve in our mentality‚ and need to understand that we are Kaizer Chiefs and we need a winning mentality.

"Sometimes to develop this mentality you need these kinds of games‚ where you stay on top of your emotions. We need to manage these emotions.

"We have a game on Saturday. Now we need to forget this derby. Sorry. Apologies to our supporters. But life continues."

Chiefs next meet SuperSport United in the Telkom Knockout quarterfinals at FNB next weekend‚ with the final times and exact day yet to be announced by the Premier Soccer League.

After so many recent drab encounters‚ Orlando Pirates and Kaizer Chiefs owe it to the South African public to deliver a memorable football match in ...
Sport
3 years ago

Argentine striker Emiliano Tade could well turn out to be a secret weapon for AmaZulu as coach Cavin Johnson shows more confidence in the ability of ...
Sport
3 years ago