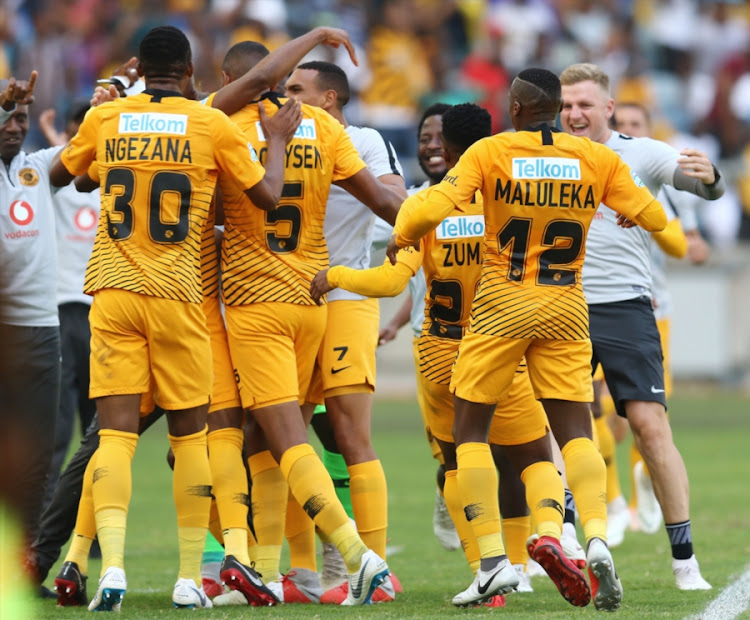 It was critical for Kaizer Chiefs to show up seeing as their nemesis Orlando Pirates had progressed to the semis on the very same Moses Mabhida Stadium pitch the previous night.

And turn up Amakhosi did‚ by beating SuperSport United 1-0 at Moses Mabhida Stadium on Sunday‚ but disjointed their performance may have been it was sufficient to progress to the semi-final stage of the Telkom Knockout.

Chiefs were the last team to clinch their spot to go in the hat alongside Baroka‚ Bidvest Wits and Pirates for the semifinal draw.

With Chiefs attacking with Khama Billiat and Leonardo Castro with Dumsani Zuma in tandem‚ the only goal of the game came from the unlikely source.

Rightback Ramahlwe Mphahlele rifled a rasping shot past Ronwen Williwams with 38 minutes on the clock.

A heartbeat earlier Chiefs had squandered a chance to shoot to the led.

Up stepped Willard Katsande who blasted his spotkick against the crossbar and the ball ricocheted back into play.

United failed to clear their lines and in the resultant follow up play Mphahlele broke the deadlock with a well taken strike.

Chiefs were far from fluid with question marks around their ability to keep their opponents at bay still very alive.

They looked troubled when SuperSport surged forward and linked lively with intricate passes in forward forays that lacked a finisher – of the ilk of Bradley Grobler – in the final third.

Amakhosi must have heaved a huge sigh of relief that their chief tormentor Grobler‚ who was a thorn on Chiefs’ flesh with three goals over two legs to eliminated them in the MTN8 semifinals‚ was ruled out by injury.

James Keene was a poor version of Les Grobler’s son on the day.

A tough tackle by strongman Willard Katsande on former teammate Reneilwe Letsholonyane set the tone when the two midfielders had a coming together.

Another follows when Itumeleng Khune handles the ball out-side his and he collided with Aubrey Modiba.

Bennett awarded a freekick but the Chiefs captain and goalkeeper escaped with a yellow card when he should have seen red.

Chiefs were first off their blocks in offensive onslaughts.

Zuma zigzagged around the SuperSport defence and fed Bernard Parker inside the area.

With a quarter of the game gone‚ Chiefs came close to opening their account but Siyabonga Ngezana was denied by the upright as Supersport survived by the skin of their teeth.

Giovanni Solinas made one change to the line-up that lost to Pirates last week‚ George Maluleka taking the place of the benched Siphelele Ntshangase.

Maluleka invited the ire of the supporters with his poor passing.

SuperSport were also without the services of Dean Furman.

Security was top notch at the venue where Chiefs fans rioted in April.

A repeat performance was never on the cards as the crowd behaved amid a strong security and South African Police Services presence. Roll on semifinals.

Kaizer Chiefs would rather focus on a positive aspect of trying to win a trophy than a negative slant of fear of exit from a cup competition when ...
Sport
3 years ago