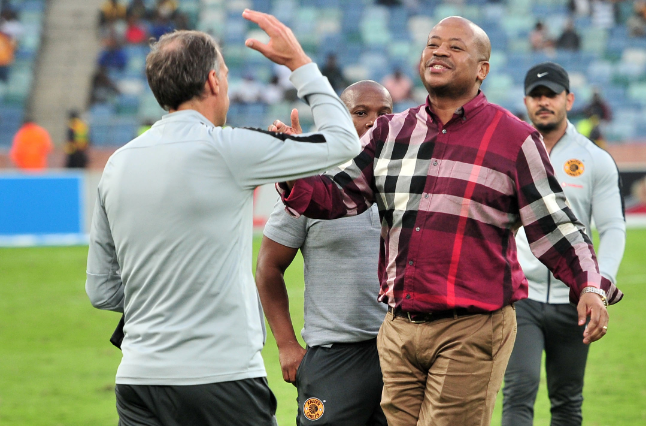 Kaizer Chiefs coach Giovanni Solinas is in a bullish mood and has declared that he is not afraid of any team – for any team‚ read Orlando Pirates.

Solinas’ Chiefs will play Pirates in the semi-final of the Telkom Knockout and the Amakhosi mentor cast himself in the role of the Fearless One soon after the draw at the Moses Mabhida Stadium on Sunday afternoon.

Chiefs beat SuperSport United 1-0 to advance to the last four.

No sooner had the dust settled on the draw‚ Solinas laid bare his brawniness and wasted no time to inform all and sundry that he was not scared of Pirates.

“If my team perform like today‚ me I no fear any team. It is clear the message yes‚” declared Solinas with a straight face.

“You can’t predict the derby. The derby is open to every result. But now this derby we are more confident‚ more confident because now the key players are improving their fitness.

"So when we have our squad available it is different. Yes‚ it is a difficult game‚ difficult because derby is derby. Pirates is a strong team but if my team perform like today‚ I no fear anything‚” said Solinas.

Asked whether he would like the semi-final to be played at Moses Mabhida Stadium‚ Solinas stuck to his fearless script.

This is a man who saw his side slip to a 2-1 defeat to the Sea Robbers a fortnight ago in a match many observers felt Chiefs were flattered by the scoreline.

Reflecting on the quarter-final win over United‚ Solinas said he was happy with how his players reacted after the Soweto derby setback.

“I am very happy today (Sunday). After we lost the derby the reaction of my boys today was very positive.

"They showed character‚ desire‚ commitment‚ a great performance. First half we played very well. Second half we knew SuperSport will come back and put extra striker and change the formation.

“In the first game in the MTN8 first leg they used the same strategy. SuperSport is a very strong team‚ good players‚ fighting‚ physically very strong. They have players who play together for a long time.

“But I am happy because the first half we play beautiful football. Second we take the reaction under control.”

Scores of supporters screamed at the Italian to ring in the changes and George Maluleka was the object of their angst owing to his wayward passing which turned possession over to the opponents.

“About the substitution‚ I’m focusing on the game. I didn’t see‚ I didn’t hear‚” said Solinas before leaping to Maluleka’s defence.

“George he is a very good player. Unfortunately he started the season injured‚ not playing for two months.

"The body‚ physically‚ the structure‚ George is strong. He needs time for top fitness. He’s a very important player for us.

"Today George performed very well because he is our midfielder that plays box to box.

"He is useful in defensive and also in attacking. Today I am happy with everybody‚ every player today gave an outstanding performance.”