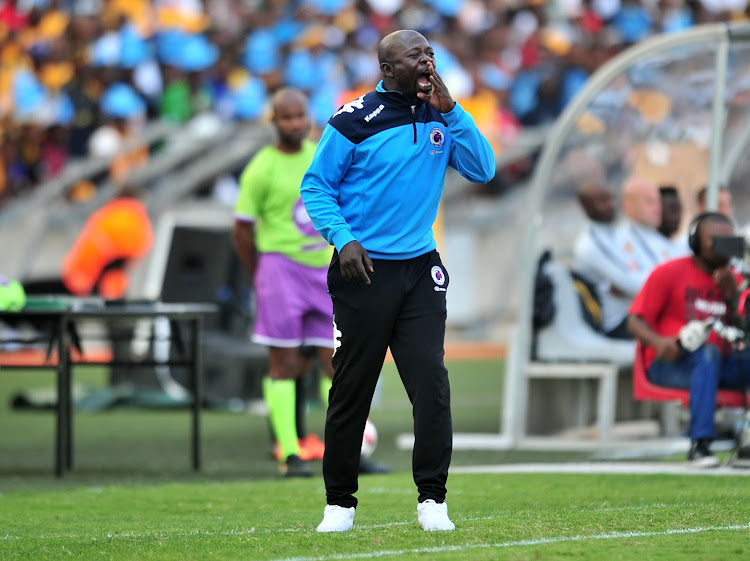 SuperSport United coach Kaitano Tembo says he was disappointed by the Telkom Knockout quarterfinal defeat to Kaizer Chiefs but not disheartened by the performance of his boys.

United lost to a solitary Ramahlwe Mphahlele strike at the Moses Mabhida Stadium on Sunday‚ coming so soon after the heartbreak of losing the MTN8 final to Cape Town City at the same Durban venue last month.

“I think it was a game of two halves in terms of performance and application. I think Chiefs were more adventurous‚ they controlled possession and got into good areas. Created a few spaces behind our defence.

“With us‚ we really didn’t have that good possession. We didn’t try and carry the ball we isolated our striker who never really got support. That made it difficult for us. They pressed us very hard especially in midfield so we could not get that pass out of transition quiker.

“They truly dominated the first half‚ credit to them and they scored that good goal from Rama. In the second half we made some few changes and we changed the way we played‚ brought in an extra striker because James [Keene] was a bit isolated.

“We brought in Evans [Rusike] and took out Yeye (Reneilwe Letsholonyane) played two central midfielders one more who was Tebza (Tebogo Mokoena). We controlled the game we pushed them back they could only play on transition‚ on counter.”

Tembo felt his men fluffed their lines in the final third where their finishing was found wanting.

“We could have done better in the final third in terms of movement‚ you know‚ in terms of penetration and a little bit of confidence in terms of taking chances as well as well as taking shots at goal.

“Overall in terms of performance‚ I was happy with the players application even the ones who came on did a good job. But Chiefs to be honest in terms of the first half performance they deserved to win the game.”

Despite the defeat‚ the Zimbabwean mentor drew some positives from the match.

“For us as a team our mentality [is that] we are not going to lose a game without fighting. We showed that we will fight till the end. That is the character‚ attitude‚ that’s our mentality.

"That is what I take from this game and the second half performance also. That was very positive. I also think Chiefs can feel that they worked very hard for this win. It wasn’t just easy.”

Elimination from cup competition means Matsatsantsa A Pitori must shift their focus to the bread and butter that is the Absa Premiership.

They are fifth on the log standings on 15 points and their next assignment is a trip to Goble Park to engage Free State Stars‚ who are three places below them and two points behind‚ on Saturday.

“For us what is important is to look to the next game. There are still a lot of games to play. We are disappointed. Most certainly the players are shattered.

"We thought that we would go to the semifinal and do well and try and erase the memories of the MTN8. But it wasn’t to be. We will always go out there and try and win the next game. We showed that today.

“We have to lift the guys and look forward to the next game which is Free State Stars in the league. We need the players to be focused. We can’t really fault them in terms of application‚ in terms of attitude and mentality.

"We just need to go back and work hard and focus on our game against Free State Stars.” They’ll do that without some of the services of skipper Dean Furman and striker Bradley Grobler who are in the casualty room.

“Those are our big players. Dean is our captain. He just had a shoulder operation. He will be out for two to three months. He probably wouldn’t be able to play until the end of the season. Bradley also [had] a groin operation. It could be like last season but we hope that he might recover a bit early.

“The positive is that Evans [Rusike] who was out for seven weeks gave us his first 45 minutes. We also miss Thabo Mnyamane who this season played only 10 minutes in the first leg of the MTN8 against Chiefs‚ he is also injured.

"We believe that they are also good players who could step in when others are not around. The only way they can show confidence in them is by playing them and supporting them.”

Orlando Pirates through to TKO semis

The crusade to heal the souls of the Pirates supporters who have suffered a four- year trophy drought continued when the Buccaneers surged to the ...
Sport
3 years ago

Orlando Pirates coach Milutin Sredojevic has paid tribute to his analytical staff‚ headed by assistant-coach Rulani Mokwena‚ for an apparent ...
Sport
3 years ago