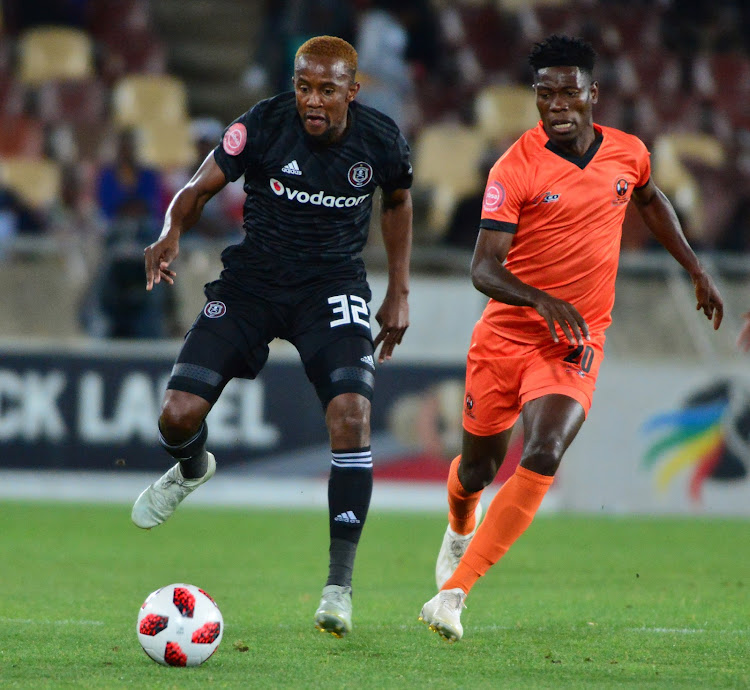 Linda Mntambo of Orlando Pirates gets away from his marker during the 2-1 Absa Premiership away win against Polokwane City at the Peter Mokaba Stadium in Polokwane on November 6, 2018.
Image: Kabelo Leputu/BackpagePix

Orlando Pirates produced a breath-taking second half performance to eke out a deserved 2-1 victory away over Polokwane City, a team they had failed to beat in three successive seasons.

Second half goals by Brazilian defender Marcelo da Silva in the 58th minute and a brilliant free-kick by Zambian striker Justin Shonga in the 60th minute gave the Buccaneers the three points that took them two points clear of Bidvest Wits on top of the Absa Premiership table.

Ayanda Nkili pulled one goal back with a thunderous header from a corner kick for City in the 90th minute.

Pirates had struggled to find their top gear in this match with the goalless first half score-line suggesting a seventh successive draw was in the offing before Da Silva’s first goal in Bucs colours and Shonga’s second goal of the season completely changed the complexion of this match.

It was City, the home side, who had produced better chances in this match before Da Silva headed in the opening goal off George Chigova’s save.

Chigova had parried Nyasha Munetsi’s header to Da Silva’s path when the City goalkeeper was trying to save a free kick which was drilled in by Thabo Qalinge into Polokwane’s dangerous area.

Just as City were trying to recover from that set back Shonga struck again when his nicely curled free kick just outside the area beat Chigova at the near post for Bucs to take their points tally to 22 in 12 matches.

In a match which was played in a drizzling rain in the second half, Rise and Shine were the better side, but just like their visitors were in the first 45 minutes, they lacked the killer passes to create clear-cut openings.

Even City’s reliable skipper Jabu Maluleke failed to add to his two league goals as he wasted a few free kicks that went their way in the second half.

The six changes made by Orlando Pirates coach Milutin Sredojevic might have contributed in Bucs taking close to 60 minutes before stamping their authority in this match.

Mlambo and Pule were the only two players who played in the previous match to at least make the Pirates bench while the others were rested.

Perhaps playing this match with one eye in the intriguing league encounter they will play against Mamelodi Sundowns at Loftus Stadium on Saturday, Sredojevic was forced to make these changes but his team initially struggled to find its rhythm.

Last season the two teams played a 2-2 draw in Polokwane before drawing 1-1 at the Orlando Stadium in the second round.

Coming to this match there was little separating these sides as they both came boasting a seven match unbeaten run with Bucs sitting two points behind Wits at the top of the table after four wins and three draws while City were third with 17 points after five wins and two stalemates.

The Telkom Knockout semifinal between the Soweto giants Orlando Pirates and Kaizer Chiefs scheduled for November 24 may be played outside of its ...
Sport
3 years ago

Sundowns compete in another space‚ says Mosimane after Baroka loss

Mamelodi Sundowns will be looking to keep up the pace with early-season pacesetters Bidvest Wits when they host unpredictable Free State Stars in ...
Sport
3 years ago