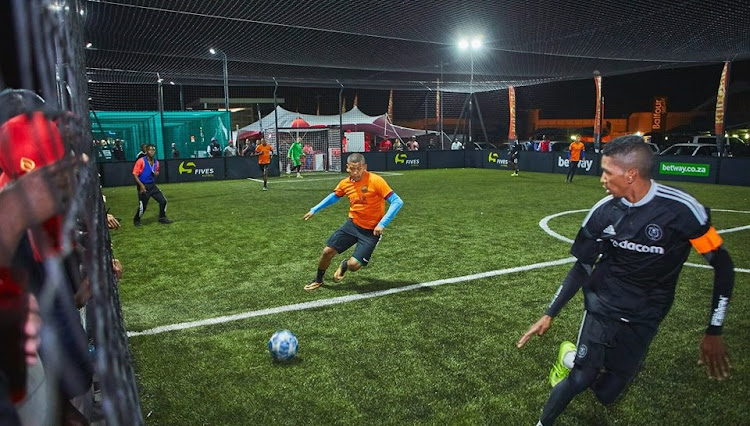 The Orlando Pirates Fives team might be brand new‚ but that did not stop them winning the national stage of the Klipdrift Cup fives tournament at the Fives Futbol Arena in Balfour Park‚ Johannesburg.

The Orlando Pirates Fives are not the official smaller-format team of Orlando Pirates Football Club‚ but are endorsed by the Soweto giants‚ said team manager Conrad Botha‚ wearing the Buccaneers’ famous kit and securing various sponsorships.

They beat Johannesburg-based Football Flava 5-3 in the final of the Klipdrift Cup.

The tournament finals are an eight-team event featuring the winners of regional 16 to 32-team stages around the country.

Botha said his team’s backing from the Buccaneers has given them unusual resources for a five-a-side team.

“Two months ago a player by the name of Kyle Koert‚ who was part of Pirates’ development and played for University of Pretoria FC‚ approached me and said let’s make this thing professional‚” Botha said.

“I had ties with Pirates. We started in September‚ acquired players and played league football in Joburg.

“We are endorsed by Orlando Pirates. We’re not actually their official five-a-side team – they don’t have one.

“But that relationship comes with kit from Adidas and apparel and training equipment.

“Another of our sponsors is Herbal Iceman [cooling gel]. And another is 340 on Main Health & Wellness Centre‚ where all the players get looked after and train and gym.

“Eventually we do want to go and play some of the big teams in Europe‚ where five-a-side is big and clubs like Barcelona and Benfica have teams.”

Botha said he currently has a squad of 13 players‚ with seven selected to play on match days.

As winners of the Klipdrift Cup‚ Orlando Pirates Fives will travel to England from November 22 to 27‚ where they will watch the Premier League match between West Ham and Manchester City at London Stadium on Saturday‚ November 24.

They are lining up various five-a-side teams to play on the trip.