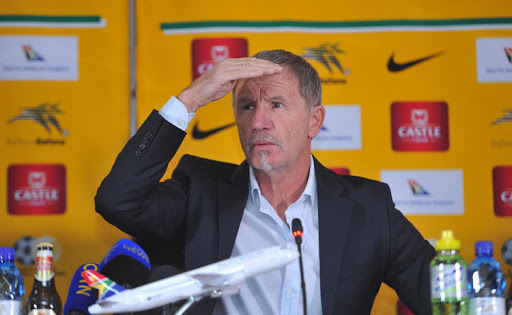 Bafana Bafana are set to take on South American side Paraguay in the Nelson Mandela Challenge on November 20‚ according to the Fifa website.

The fixture is listed by the governing body‚ though the venue and kick-off time is yet to be confirmed.

The match will follow Bafana’s Africa Cup of Nations qualifier against Nigeria at FNB Stadium on November 17 and will be used to celebrate the centenary of former president Mandela‚ with media reports suggesting the game could be played in Port Elizabeth.

Paraguay will provide a stern test for Bafana and are currently ranked at number 31 in the world by Fifa‚ though the lack of qualifiers means this will be just a third match of 2018 for the side. They lost 1-0 to the USA in March and 4-2 to Japan in June.

As the match falls on a Fifa match day‚ coach Juan Carlos Osorio will be free to select a full-strength squad‚ which could include West Ham defender Fabián Balbuena‚ and the Corinthians duo of Ángel Romero and Sergio Díaz‚ two exciting young attacking talents.

Many of Paraguay’s players ply their trade in Brazil‚ Argentina‚ Mexico and the United States.

Bafana have clashed with the South Americans on three previous occasions and have yet to face defeat.

They played to a 2-2 draw in the pool stages of the 2002 World Cup under Jomo Sono‚ with Teboho Mokoena and Quinton Fortune‚ via a penalty‚ on target.

Bafana then claimed a 3-0 home win in a friendly in 2008 under Carlos Alberto Parreira‚ as Surprise Moriri‚ Benni McCarthy and Siphiwe Tshabalala scored.

And Tshabalala was on target again with a long-range scorcher when the teams played in Asuncion in a pre-2010 World Cup friendly that ended 1-1‚ also under Parreira.