WATCH | 'I found the Pirates bus parked where I park': Mosimane on THAT scuffle 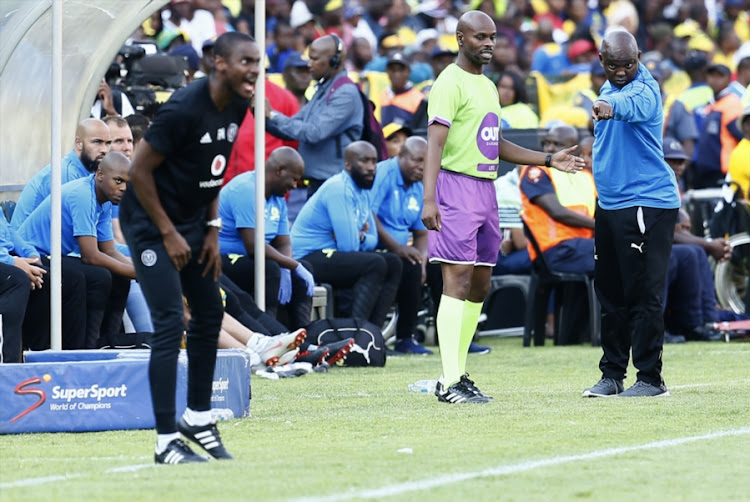 Mamelodi Sundowns coach Pitso Mosimane has defended his team after the scuffle that broke out between the Pretoria side and the Orlando Pirates security personnel at Loftus at the weekend.

The security staff of both teams clashed outside of the stadium over the designated parking bay for the Pirates bus before the start of the highly charged Absa Premiership encounter‚ setting the stage for a tension-riddled afternoon.

“I found the Pirates bus parked where I park.

"What do you mean‚ this is my stadium‚ it’s my home.

"They parked in my space and I parked outside.

"And then is that a commotion?”

Mamelodi Sundowns faces possible punishment from the Premier Soccer League (PSL) after a fan in their colours attacked the Orlando Pirates bench ...
Sport
3 years ago

Outspoken Mamelodi Sundowns coach Pitso Mosimane says he rates Orlando Pirates counterpart Milutin Sredojevic as one of the top five coaches on the ...
Sport
3 years ago

Asked if it was right for Pirates to park their bus at the stadium's main entrance‚ Mosimane said it was not correct but added that he elected to humble himself and park outside the venue.

He also blamed security after walking inside the stadium.

“I walked from outside to get inside the stadium‚ their (the Pirates') bus was there‚" he said.

"Do I park at the Orlando Pirates stadium's entrance?

"We still gave them respect‚ we came from outside.

“I didn’t see that (the bus incident) to be honest.

"I heard that there was a commotion. I didn’t see that.

"When they parked in my space I said in my house you can’t sit where you want.

"What I did‚ I just humbled myself and I parked outside and walked inside. Let them enjoy the parking‚ I mean in front of my house and my door.

Orlando Pirates Milutin Sredojevic says he would have slapped Bongani Zungu if the Bafana Bafana midfielder was one of his former players and had ...
Sport
3 years ago

“But I don’t blame them. I blame the security. I mean what is that?

"Can you go to Old Trafford and you do that. Are you serious‚ What is this? No it is unacceptable.

"Then you say it’s Sundowns which caused problems. Let’s be honest.

"Let’s tell the truth here. Unless you know it better and if anybody knows it better tell me now. I’m listening.

"Who knows it differently? Okay‚ nobody. That’s the fact there.”