Phillip is back! Durban wants Soweto Derby to feel like the 2010 World Cup 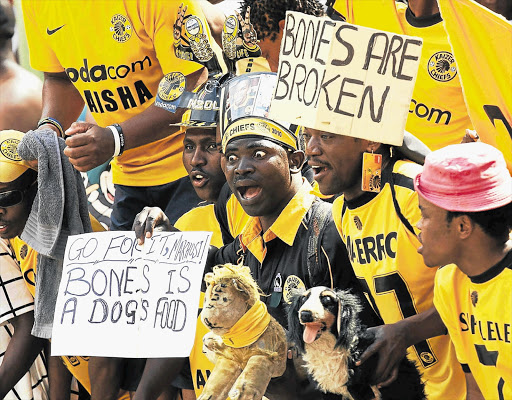 Fans are expected not just to pack out the Moses Mabhida Stadium in Durban for Saturday's Soweto Derby, but also four different fan parks being set up in the coastal city for those who didn't get tickets.
Image: SIMPHIWE NKWALI

Durban’s hosting of its first Soweto derby between Kaizer Chiefs and Orlando Pirates since 2014 on Saturday will be an even bigger event than just the match, with four fans parks to be staged around the city.

Signalling the immense scale of the interest in the match, the Telkom Knockout semi-final at the 62,000-seat Moses Mabhida Stadium was sold-out within two hours of tickets going on sale.

But supporters who could not buy tickets will now have the opportunity of viewing the match on big screens at four public viewing areas, which is also part of Durban aiming to maximise the economic impact to the city of staging the derby.

Three people have been arrested in Durban on Tuesday for selling fake tickets for Saturday’s Telkom Knockout semifinal between Kaizer Chiefs and ...
Sport
3 years ago

Kaizer Chiefs stand on the brink of the longest winless run in Soweto Derby history as they prepare to face bitter rivals Orlando Pirates in the ...
Sport
3 years ago

The eThekwini municipality said in a statement on Tuesday following its Executive Committee meeting: “Emerging and small businesses are set to benefit from the City hosting four public viewing areas to accommodate thousands of soccer fans, comprising of both locals and tourists, for the Telkom Knockout semi-final match being played in eThekwini on November 24.”

A report outlining the cost of the fan parks as well as the widespread economic impact and benefit hosting the game will have on the City was tabled at Tuesday’s meeting. The Executive Committee is the second-highest decision-making body in the eThekwini council.

“And with a share of 35,000 spectators coming from out of town, the projected spend of all spectators is approximately R40m. This is with a projected impact of the City’s GDP of over R86m and an annualised job creation of over 1,800 sustained and temporary jobs created,” the statement said.

Tickets for the Telkom Knockout Soweto derby semifinal between Kaizer Chiefs and Orlando Pirates in Durban on Saturday‚ November 24 have sold out‚ ...
Sport
3 years ago

The biggest of the fan parks is slated for New Beach on the famed Golden Mile beachfront – in close proximity to where the Fifa Fan Park was held in 2010. Between 10,000 and 15,000 spectators were expected to accommodated at New Beach, and there is no entrance fee.

“The other township viewing areas will be Max’s Lifestyle in uMlazi, Artizen in KwaMashu and Comfortzone in Clermont. These fan parks are expected to accommodate between 5,000 and 10,000 people,” the statement read.

“The report outlines the business opportunities for local small, medium and micro enterprises who will be afforded the opportunity to sell various offerings such as food, drinks, and regalia of the soccer clubs as well as the activation of beachfront tourism experiences such as rickshaw pullers at New Beach.

“The report states that these businesses will be exposed to a large number of foot traffic as people will be attracted to the fan park.

“Local artists will also be empowered with emerging talent scheduled to perform on stage during the match broadcast. They comprise 51 percent of the entertainment lineup at this fan park.

“Emerging township lifestyle establishments will also be afforded space to sell their refreshments, namely shisanyama, to the audience at the beachfront fan park, which will generate revenue and will allow them to gain market exposure beyond the townships where they are normally located.

Chiefs and Pirates meet in their second derby of the 2017-18 season, the first, an Absa Premiership league encounter at a sold-out FNB Stadium on Saturday, having ended in 2-1 win to the Buccaneers on October 27.

FNB Stadium was unavailable due to a pre-booked prayer meeting.