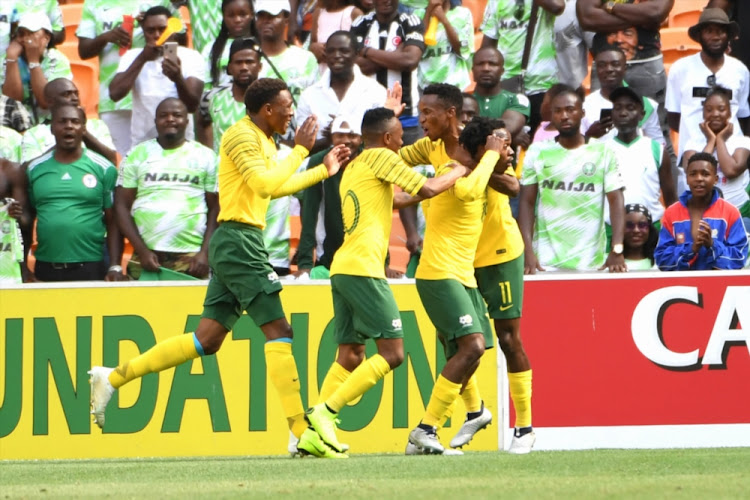 There have been moments to celebrate for Bafana Bafana this year - but 2018 was not without its disappointments.
Image: Lee Warren/Gallo Images

Bafana Bafana’s 1-1 draw with Paraguay in Durban on Tuesday meant they finished 2018 unbeaten, but can look back on mixed success in a year that has not been without its disappointments.

The national team won the Four Nations Tournament in Zambia, collected the Plate trophy at the Cosafa Cup and have remained on course for African Nations Cup qualification, despite making their job tougher than it needed to be.

The team claimed four wins and six draws in their matches this year, with probably more lows than highs.

TimesLIVE takes a brief look back at their 10 games in 2018, the fewest they have played since appearing in just nine internationals in 2011.

A debut goal for French-based striker Lebo Mothiba helped secure a draw with a strong Angola side in Ndola, Zambia, in the semifinals of the Four Nations Tournament. Bafana would go on to win the shootout 5-3 as Darren Keet saved twice from Angolan spot-kicks.

Bafana’s Mothiba is an artist on the ball – and off it, too

Striking in football is an art form – and Bafana Bafana’s most exciting striker to emerge for some time, Lebo Mothiba, has revealed that he’s an ...
Sport
3 years ago

Bafana lifted the trophy against a tough Zambian outfit though the scoreline doesn’t tell the story of the pressure they were under in the match. Percy Tau put them ahead early before Mothiba made it two-in-two with an injury-time second. Among their best results of the year.

Huge disappointment as an admittedly second-string Bafana were held to a goalless draw in Polokwane in the cup quarterfinals, and then lost on post-match penalties. Certainly they created enough opportunities to win the game, but Luther Singh had a nightmare and also missed with a poor spot-kick in the shootout. To be fair, this Madagascan side went on to cruise to Nations Cup finals qualification for the first time in their history.

Bafana Bafana’s aims of introducing more young players to international football‚ handing more caps to others and perhaps identifying some who can ...
Sport
3 years ago

Bafana’s second-string picked apart a full-strength Namibia in fine style in the Cosafa Cup plate semifinals, with Lebogang Maboe the star man with a brace of goals and a fine all-round performance. Aubrey Modiba (penalty) and captain Siyanda Xulu were also on the scoresheet in a dominant display.

Another comfortable win against a Botswana side who were playing their sixth game in 12 days, and looked shattered. Motjeka Madisha headed Bafana in front and they rarely looked troubled as they sealed the result through further goals from Modiba and Maboe.

A big disappointment as Bafana failed to claim a home win and in truth were fortunate not to lose the game. Libya had by far the better chances and could have won comfortably had they used them. By contrast, Bafana offered little going forward.

The biggest-ever win in Bafana history, though they have rarely played against such weak opponents. The scoreline should have been double figures but for wasteful finishing and the fine work of the islanders’ goalkeeper. Mothiba made it three goals in as many caps, the first player to score in his first three games for Bafana and it was a well-taken strike too. There was also a first international goal for Dino Ndlovu.

The most disappointing result of the year and hard to fathom after having given the islanders six just days before, and taking into account Libya went to Victoria in November and won 8-1. There were perhaps mitigating circumstances - the pitch was horrendous and there was gamesmanship from the hosts - but still a desperately disappointing display of poor finishing. If Bafana had managed to win, they would have booked their ticket to the Nations Cup finals in Cameroon already.

Bafana Bafana's date with destiny might still be four months away but coach Stuart Baxter is already thinking about how to negotiate a successful ...
Sport
3 years ago

On the face of it a good point with a lot of players missing from the Bafana line-up through injury, but they also rode their luck with Nigeria netting twice through goals that were incorrectly given offside. Good fight to come from a goal down after Buhle Mkhwanazi had put the ball into his own net, but Mothiba’s equaliser was all about the work of the brilliant Tau.

Tau came to the rescue again with a late-late equaliser that ensured the side finished the year unbeaten. It was very much a second-string Bafana and they had their moments, but again had large slices of luck as Paraguay hit the post twice and also spurned other opportunities. Bafana had chances of their own though in what was an entertaining fixture in the rain in Durban.