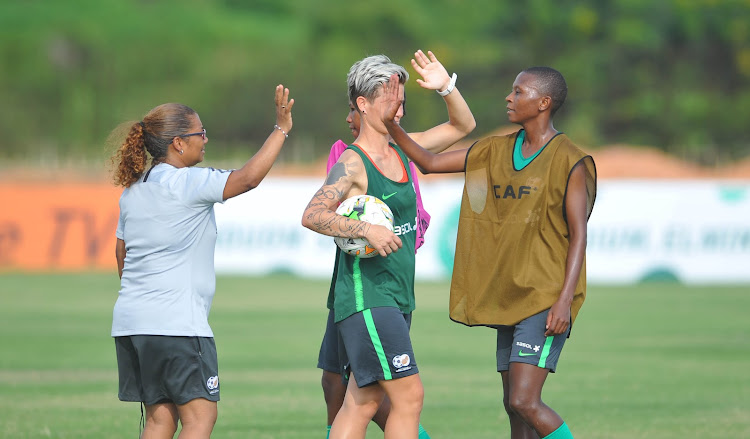 Banyana Banyana head coach Desiree Ellis and her players share a light moment during training at their base at Ndoum Stadium in Ghana on November 19 2018.
Image: Sydney Mahlangu/BackpagePix

Banyana Banyana scored a 7 -1 victory against Equatorial Guinea on Wednesday night and Twitter turned into a whole vibe to celebrate the win.

The team defeated Equatorial Guinea in Group B of the Africa Women Cup of Nations at the Cape Coast Sports Stadium in Ghana.

Mzansi was impressed with Banyana Banyana's performance, with some people comparing the team to Bafana Bafana. Their male counterparts have not had a successful run this year.

Thembi Kgatlana was the star of the game, scoring two of the seven goals. The South African team is expected to play Zambia on November 24.

Many stressed the need for the South African Football Association to invest more in the team as their performance speaks for itself.

#BanyanaBanyana the pride of our nation. Very proud of this team and the commitment they give in the field of play. 7 of the best.

#AWCON2018 #BanyanaBanyana well we decided to call "Kgatlane" Percy Tau for her footballing skills, well done and thank you for a hatrick today you deserve it gel.

#BanyanaBanyana can play shame and they can score, something bafana bafana needs to learn. Mxm @SAFA_net must do right by banyana banyana.

I feel that @Banyana_Banyana are not getting the recognition they deserve noting the sterling performance they're showcasing. Can we as soccer lovers fill up the stadia when our ladies national team plays? #BafanaBafana#Safa#BanyanaBanyana#PSL

The pain and suffering Bafana Bafana is causing us has somehow drawn us closer to the #BanyanaBanyana. 😂

What more do #BanyanaBanyana players have to do for them to get paid as much as their male counterparts? #AWCON2018 pic.twitter.com/QmSWRFAikE