Pirates might be on a roll, but Chiefs will rely on cup history for confidence 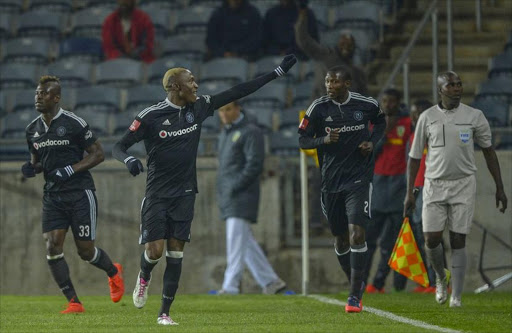 Orlando Pirates striker Tendai Ndoro celebrate a goal against Ajax Cape Town at Orlando Stadium. The team will be hoping to repeat celebrations when they take on rivals Kaizer Chiefs on Saturday.
Image: Gallo Images

Orlando Pirates may hold an overall better record against their Soweto archrivals Kaizer Chiefs in recent times, but Amakhosi should go into their Telkom Knockout semi-final clash against the Buccaneers with their tails up – if, at least, the last 10 cup results between the two sides are anything to go by.

Chiefs are winless in 10 games in all competitions against Pirates dating back to December 2014, but in the last 10 cup matches, Amakhosi have won seven. This includes the 2014 MTN 8 final, which was played at Moses Mabhida Stadium in Durban – the same venue that will host Saturday’s match.

The last 10 matches saw Pirates record four victories and six draws against Chiefs, but this might look different if Fifa did not note penalty shootout wins as draws in their records. Chiefs won a cup tie 6-5 against Pirates on penalties in 2015.

Kaizer Chiefs stand on the brink of the longest winless run in Soweto Derby history as they prepare to face bitter rivals Orlando Pirates in the ...
Sport
3 years ago

Amakhosi were winners against Pirates in the last two cup clashes between the sides. Those victories include the 6-5 penalty victory for Chiefs after the goalless TKO semi-final tie at FNB Stadium in November 2015.

The last time Pirates won a cup tie against Chiefs was in 2013 when Lennox Bacela’s goal gave Bucs a 2-1 aggregate victory in the MTN8 semi-final.

Before that, Pirates had also beaten Chiefs 1-0 in the final of the MTN 8, with Oupa Manyisa scoring the winner for Bucs.

It was in 2010, the year South Africa hosted the Fifa World Cup, when Chiefs dominated Pirates in the TKO.

Amakhosi first beat Bucs 3-0 on penalties in the TKO semi-final which was played in April and repeated the same scoreline when they met in the final of the same competition on December 3, with Sthembiso Ngcobo scoring a brace before Siphiwe Tshabalala sealed the victory.

In between those two TKO defeats in 2010, Katlego Mashego’s goal ensured Pirates beat Chiefs 2-1 in the semi-final of MTN8, which was played on September 26 2010 at Soccer City.

An alleged official who appeared to be part of Orlando Pirates’ team entourage at Loftus Versfeld when skirmishes broke out with Mamelodi Sundowns’ ...
Sport
3 years ago

The Premier Soccer League (PSL) are investigating the skirmishes that took place between Orlando Pirates team officials and Mamelodi Sundowns ...
Sport
3 years ago