Bongani Zungu puts a ring on it at the Eiffel Tower 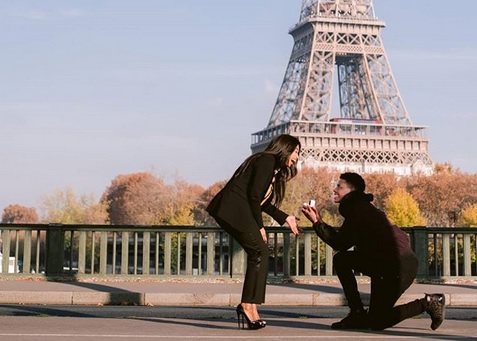 Midfield dynamo Bongani Zungu may have just scored the greatest goal of life at the weekend.

The former Mamelodi Sundowns attacking midfielder and his long-term girlfriend Khanyi Cele hinted on social media that they have become engaged.

The 26 year-old Amiens SC star took to Twitter to tell his thousands of followers that he popped the question to Cele at Paris' iconic Eiffel Tower.

The gorgeous Cele seems to have said "yes" to her man's proposal‚ as the pictures showed Zungu on bended knee.

The lanky midfielder appears to have paid lobola for Cele in 2014‚ although the two went their separate ways afterwards.

Happily they have reunited.

The midfield star player posted a series of snaps from his eventful weekend‚ to the delight of his adoring fans.

His season has been brought to an abrupt end after a knee injury sidelined him three months ago.

This saw Zungu ruled out for several months and missing all three big games for Bafana Bafana's 2019 African Cup of Nations qualifying campaign.