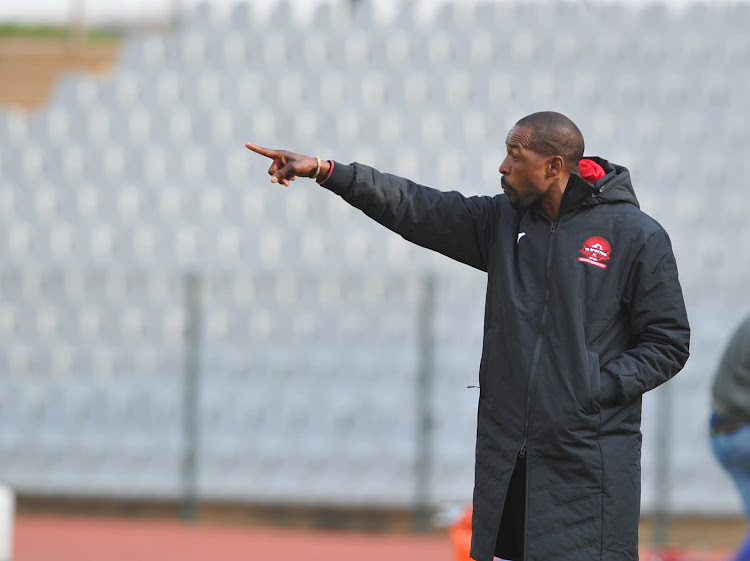 Benson Mhlongo is back as head coach of TS Sporting following two weeks of absence from the training grounds due to a disagreement with the club's management.
Image: Sydney Mahlangu/BackpagePix

Sporting released a statement on November 19 in which they revealed that the former Orlando Pirates assistant coach had not reported for duty since November 13 and had consequently been replaced by his second in command Mfanimpela Maseko.

At the time‚ Sporting said Mhlongo’s absence was triggered by the request made by the club to him to work closely with newly appointed technical director Sammy Troughton‚ who was appointed on November 5.

However‚ it seems sanity has finally prevailed at the NFD newcomers after a meeting with Mhlongo’s manager and the club’s management reached a resolution.

Benson Mhlongo is adamant he is still the head coach of TS Sporting despite the National First Division (NFD) newcomers announcing that his assistant ...
Sport
2 years ago

“We would like to inform the public in general and our supporters in specific that we have reached an agreement with our head coach Mr Benson Mhlongo that he returns to work on the 27th of November 2018‚” Sporting said in a statement.

“It’s been pretty stressful to have a hanging issue especially in relation to a special position like that of a head coach but the great thing is that we have been able to find each other.

“The road to the top will never be easy that is why we agreed that we need to work as a team.”

Sporting won 2-1 away at University of Pretoria at the weekend in Mhlongo’s absence with his assistant Maseko taking charge.

Sporting are sitting pretty on the NFD log table in second spot with 22 points after 12 matches and are four points behind leaders Stellenbosch FC nearly at the half way mark of the season.

Mhlongo was appointed at the beginning of the current season having served as assistant coach at Pirates in the previous season.

"We welcome him back with open hearts and wish him well in his duties.”

Sporting host fourth-placed Tshakhuma Tsha Madzivhandila at Kabokweni Stadium on December as they bid to keep pace with leaders Stellenbosch.