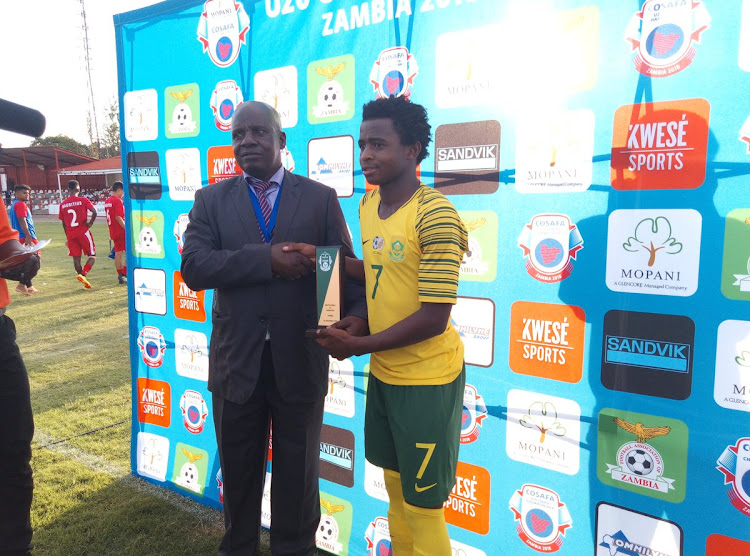 Amajita's Promise Mkhuma won the man of match award following his fine performance in their 5-0 win against Mauritius at Nkana Stadium.
Image: TWITTER/SAFA

South Africa cruised to a 5-0 victory over Mauritius as they opened their defence of their COSAFA Under-20 Championships title with a comfortable win at the Nkana Stadium in Kitwe‚ Zambia on Monday.

Coach Thabo Senong’s side scored all their goals in the first 38 minutes‚ before taking their foot off the gas in the second half with the job already done.

They have now taken control of their three-team Group B at the regional championships‚ with a second and final game against Eswatini to come on Saturday‚ with only the top team in the pool advancing to the semifinals stages.

Senong has said that he is using this tournament as preparation for the 2019 African Under-20 Championships in Niger in February and will be impressed with the way his side were quick out of the blocks.

Amajita were cutting their opponents to ribbons on the wings and when Kaizer Chiefs midfielder Nkosingiphile Ngcobo was sent through on goal‚ his powerful drive was too hot for the Mauritian keeper Jean Michel.

The islanders’ defence was at sixes and sevens and it was 4-0 on 26 minutes when Promise Mkhuma worked his way to the byline and laid on a perfect cross for Foster to grab his second.

The South Africans continued to attack and added a fifth as they found more joy on the flanks when Malebogo Modise found acres of space on the left and his low cross was turned home by James Monyane.

South Africa won this title in Kitwe 12 months ago after they beat Lesotho 2-1 in the final‚ having picked up silver the year before on home soil.