Kaizer Chiefs football manager Bobby Motaung has brushed off the sharp criticism that greeted the club’s decision to reappoint coach Ernst Middendorp a few days ago.

The German coach’s unexpected return to the coaching seat he unceremoniously vacated in March 2007 sent social media into meltdown on Friday but Motaung insisted that there would have been some negativity even if they had appointed José Mourinho or Sir Alex Ferguson to the seat.

‘‘I always (prefer) to focus on the positives‚” he said

‘‘We expect negativity and this puts us properly in line with what we want to achieve. 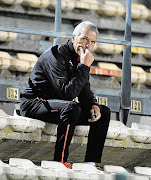 ‘‘There would be criticism everywhere. So we welcome all the negativity and like the coach (Middendorp) says‚ the results will show.”

He rejoined Chiefs on a two-and-a-half year contract after the club sacked Italian Giovanni Solinas on Friday.

Motaung said they have maintained contact with the German over the years and they began discussion about a return to Naturena two weeks ago.

‘‘For us we are more comfortable bringing back Ernst back because we have experience with him‚“ Motaung said.

‘‘We know his pedigree and his work ethic.

"We never parted ways in such a matter that we could not even talk — we have been commentating over the years.

‘‘Even when he was with other clubs we were communicating with him as our policy is not to fight with our coaches and to part ways amicably when things are not working out.

The notoriously fiery mentor will have to win the Chiefs fans over as they resorted to violence when they wanted him out during his first spell as coach.

A defeat to then relegation-threatened AmaZulu in March 2007 proved to be the final straw. Supporters were so incensed that they staged a demonstration at the stadium.

Are you the ultimate Kaizer Chiefs supporter?

The relationship between the coach and the supporters had been stormy since Middendorp arrived at Chiefs in June 2005.

Supporters were reluctant to warm to the German‚ who had the misfortune to take over after the championship-winning era of crowd favourite Ted Dumitru.

The fans disagreed with Middendorp’s selections from the start and they often questioned why their favourite players were regularly played out of position.

Matters came to a head when the club’s supporters ripped up the FNB Stadium seats and then tried to burn down the venue in August 2005.

Angry supporters went on the rampage and used debris from the damaged seats to start fires in the stands after Chiefs were surprisingly beaten 2-1 by Celtic in a SAA Supa 8 quarterfinal.

Middendorp was their intended victim‚ but he managed to get off the pitch too quickly for them.

They would repeat their actions a few times as the drama unfolded.

But Motaung was hopeful that the fans would be patient with the coach.

‘‘Even the issues of the past‚ our supporters are very forgiving I know‚” he said.

‘‘Our supporters love the club and they will support the club positively.

‘‘They are looking forward to supporting us with positive energy and bringing back the results.”