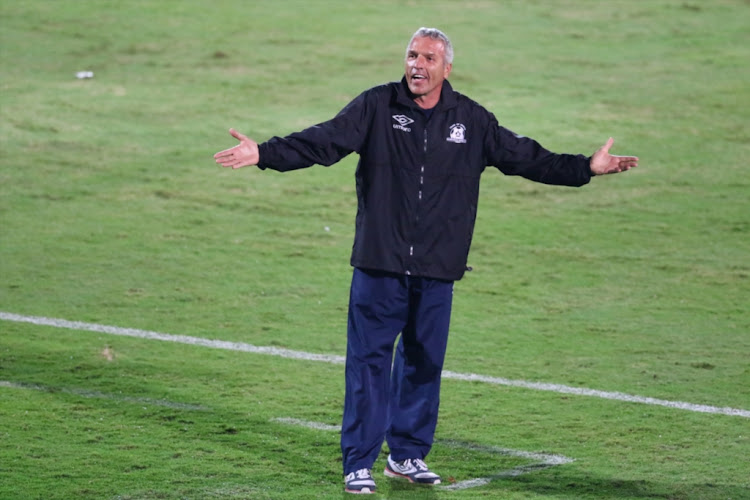 Two new coaches will be on the bench in midweek as the Premier Soccer League resumes with one more waiting in the wings after a week of disruption at the helm of clubs.

Ernst Middendorp begins a second spell in charge of Kaizer Chiefs as they host SuperSport United at the Mbombela stadium in Nelspruit on Wednesday just five days after a surprise return to the side in the wake of the firing of Giovanni Solinas.

Middendorp had been approached by Free State Stars just a fortnight ago after the Bethlehem-based outfit sacked Luc Eymael but the 60-year-old German told them he was unable to get out of his contract in Thailand‚ where he had been serving as technical director at Bangkok United.

But there were‚ obviously‚ no such impediments for Middendorp when Chiefs came calling.

Stars are still to officially appoint a replacement for Eymael but have Serbian-born Nikola Kavazovic in their sights and he should be on hand to watch on Tuesday night when they host Telkom Knockout runners-up Orlando Pirates at Goble Park on Bethlehem.

The 43-year-old has previously served as national coach of Tajikistan and Sri Lanka and worked in Africa at Township Rollers in Botswana and AFC Leopards in Kenya.

If Kavazovic is to sign with Stars‚ he will have to wait until next year to take charge of his first game as Stars do not play again until January 5 when they host Bidvest Wits.

Sly Mosala and David Vilakazi have been acting coaches for the Free State clubs since Eymael’s departure.

Joel Masutha will take charge of Chippa United for the first time as they travel to Cape Town City for Tuesday’s match at the Athlone Stadium.

Masutha replaces Eric Tinkler and is the third coach at the club this season after Dan Malesela became the first coaching casualty of the season back in August.

Masutha had been fired by Black Leopards after they lost 3-1 at City last month.

New Kaizer Chiefs coach Ernst Middendorp says he is stepping into his role a lot wiser than he was when he got the job in his initial stint in 2005.
Sport
3 years ago

Fans are not sure if bringing back Ernst Middendorp is the best thing for the team.
Sport
3 years ago