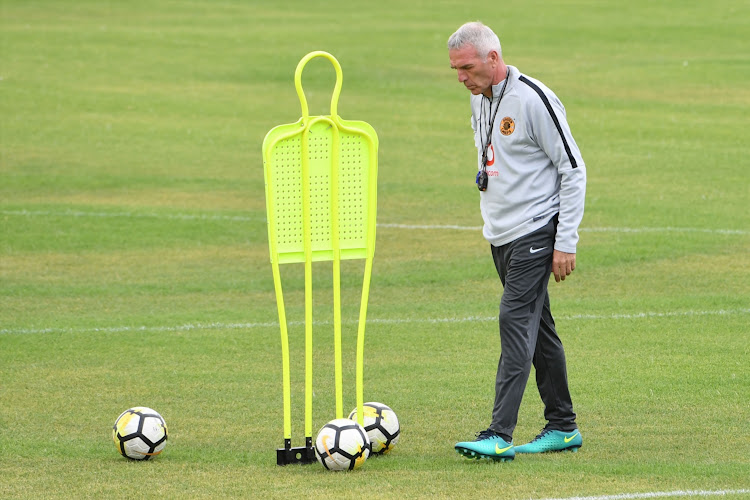 Newly appointed Kaizer Chiefs' German coach Ernst Middendorp takes charge of his first training session at the club's base at Naturena in the south of Johannesburg on December 10, 2018.
Image: Lee Warren/Gallo Images

Kaizer Chiefs are to take their Caf Confederation Cup tie to Durban at the weekend while Mamelodi Sundowns have finally got clarity on their plans after being left in the dark by the Confederation of African Football (Caf).

Chiefs will host Elgeco Plus of Madagascar in the first leg of their second round tie on Saturday at the Moses Mabhida Stadium with a 6pm kick off.

The game will be the second in charge for returning coach Ernst Middendorp‚ who is on the bench for the first time in more than a decade at the club on Wednesday night when he begins his comeback as Chiefs coach in the Premier Soccer League (PSL) clash against SuperSport United at Nelspruit’s Mbombela Stadium.

Chiefs will go to Antananarivo for the return game next weekend and should they progress will then face one more preliminary round before the group phase of the Confederation Cup begins early next year.

In the Caf Champions League‚ Sundowns are away against Al Ahli Benghazi from Libya‚ who are banned from hosting games at home by Fifa because of the tenuous security situation in the north African country.

Ahli Benghazi have been forced to switch previous games in Egypt but Sundowns had been unsure of the exact time‚ date and venue until late on Monday when Caf confirmed they would be playing at the Petrojet Stadium in Cairo this Sunday with a 3pm kick off.

Previously they had been told by the Libyans the game would be on Saturday.

Sundowns will depart for Egypt after they host Telkom Knockout winners Baroka FC at Atteridgeville in an Absa Premiership eague clash on Tuesday.

The second leg of the second round tie against the Libyans is set for Loftus Versfeld next Saturday and should Sundowns progress then they will have qualified for the group phase for the fourth successive time.

New Kaizer Chiefs coach Ernst Middendorp says he is stepping into his role a lot wiser than he was when he got the job in his initial stint in 2005.
Sport
3 years ago

Orlando Pirates are also chasing a group slot and have a modest task against Black Africa from Namibia‚ who they host at the Orlando Stadium on Saturday in the first leg of their second round tie.

The return will be in Windhoek on Saturday‚ December 22.

The draw for the group phase of the Champions League‚ as well as the third round pairing for the Confederation Cup‚ will be made in Cairo on December 28.

The next round of matches is being played on the weekend of January 11-13.