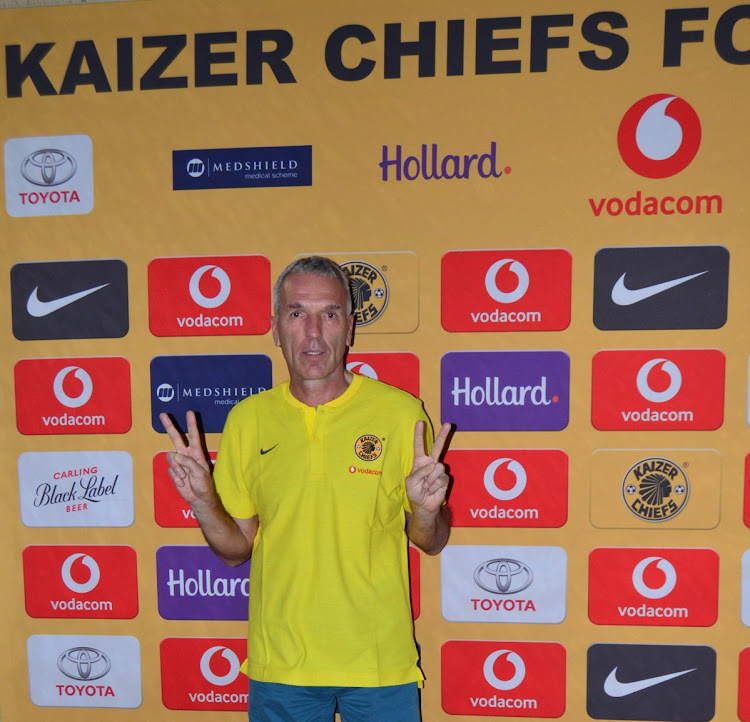 Amakhosi chairman Kaizer Motaung has explained the return of Ernst Middendorp as the team's coach
Image: Via Twitter/@KaizerChiefs

Ernst Middendorp’s appointment as Kaizer Chiefs' new head coach after the dismissal of Giovanni Solinas last week was not greeted with the kind of enthusiasm usually reserved for new coaches at the big clubs.

Middendorp’s previous stint at Naturena between 2005 and 2007 did not end that well and his abrasive style of management, one that rubs certain people up the wrong way, did not help the German-born coach’s return to the club.

Here are fives things TimesLIVE believes can immediately help Middendorp win the hearts of Amakhosi faithful who don't believe his comeback will see the club reviving its fortune:

The one thing that's irritated many fans and robbed Chiefs of many a victory this season as Solinas, despite having five months with the team, did not seem to know his best starting XI.

Middendorp needs to hit the ground running by finding the right combinations and not try to please every player by putting them in the team even when they do not deserve to be there.

Chiefs have a decent team, but what’s been lacking is a coach who knows how to blend the right players in the right ways.

No coach can be successful if he doesn’t have the full backing of his players. Middendorp will have to make his coaching methods simple enough for his players to grasp at a first go. But more importantly, he needs to develop something that he’s never had as coach: sympathy towards players' limitations and being prepared to offer an encouraging word when they get things wrong.

That will require Middendorp to drop his temper tantrums on the touchline in order to be able to hear other voices, especially of those offering him advice on how to handle a South African player.

Use Bartlett as a link man

Middendorp has perhaps chosen his best assistant in Shaun Bartlett, who retired at Kaizer Chiefs a few years ago. It also helps that Bartlett has done his coaching badges, which means he won’t just be a ball boy at Chiefs but will be there to offer the head coach proper advice on how to approach his job in its entirety.

Middendorp must also use Bartett as a link man to the hearts of his players. Once he knows the kind of talent and personalities he’s got, Middendorp’s job should not be that difficult at Chiefs. He must just chill and take it game by game.

Be open and frank with the media

One of the aspects often forgotten by coaches at big clubs like Chiefs is that you have to have the ears of the media. Once you have that, half of your job is done. Closing doors to the media will not help Middendorp's cause, while wisely opening them will lift the club's image and, with it, the whole spirit in the Chiefs setup.

So Middendorp must try to do something he's never done before: be media-friendly while focusing on his job. Previous coaches like the late Ted Dumitru did well at Chiefs while they also had the media in their pocket. Doing otherwise will be a recipe for disaster for Middendorp.

We’ve seen a tendency at Chiefs of not taking certain cup competitions seriously. The CAF competitions, the Champions League and Confederation Cup are the best examples of the competitions that Chiefs have over the years decided not to go all out in.

It will help Middendorp to change that perception by also accommodating them in the way that shows they are not just participating for the sake of it.

After all, after three years without lifting a trophy, Chiefs cannot afford to pick and choose on trophies – they need to go for everything in front of them if they are to restore their impaired dignity.

Kaizer Chiefs are to take their Caf Confederation Cup tie to Durban at the weekend while Mamelodi Sundowns have finally got clarity on their plans ...
Sport
2 years ago