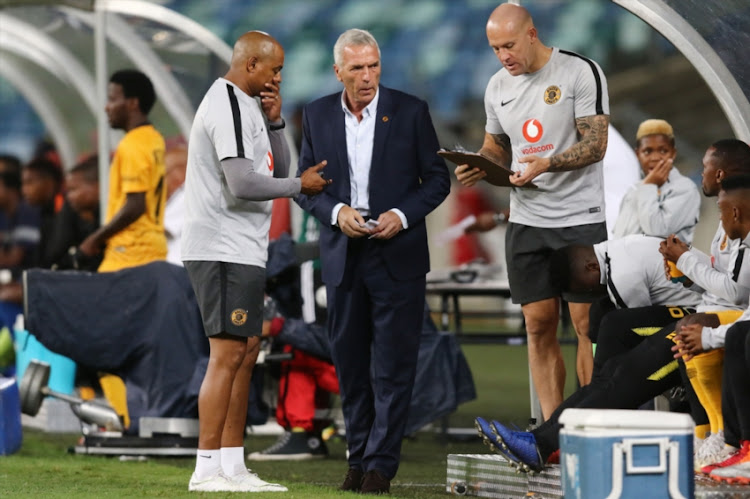 Kaizer Chiefs coach Ernst Middendorp has admitted that for football teams‚ and especially big clubs‚ the trend now is for an extended technical staff with many specialists.

As he embarks on his second stint at Chiefs‚ Middendorp was asked what has changed in football coaching from when he first coached Amakhosi in 2005 to 2007.

The coach‚ who has roped in former Bafana Bafana striker Shaun Bartlett as his assistant‚ said big technical staffs are the trend now.

“At the last team I was working at‚ Bangkok [United]‚we had 15 technical team members‚” Middendorp said.

“Fifteen members where everybody was absolutely‚ from the physical‚ athletic side to the anaylytic side‚ taking individual responsibility. Ands this is a normal way in these days.

“ … It doesn’t help these days to have one person [assistant]. You have to manage‚ you have to direct an entire technical team.

“And the same if a team is not capable of moving for 90 minutes. And for this‚ teams spend a lot of money for GPS [tracking]. For knowledgeable people in terms of physical trainers‚ preventive staff.

“And this is the story. It is not a one-man show any more – not at all.

“And this is a very clear understanding where everybody has to contribute‚ in each and every department‚ to the success of the team. And that’s a huge difference. It was not like this in 2005‚ 2004.

“It started probably to take the journey with GPS. And unfortunately a lot of coaches are not capable of reading the GPS‚ and to know the consequences.

“Sometimes you have to take a player out because of the numbers you get from your coach who’s handling the GPS.”

Middendorp has generally been recognised as a technically proficient coach‚ good at keeping in touch with developments in modern football.

Chiefs have an excellent facility at their Naturena headquarters and a strong technical staff.

It is debatable‚ though‚ whether they have as strong a coaching department as the armies of boffins assembled by the head coaches at their “big three” rivals‚ Mamelodi Sundowns’ Pitso Mosimane and Orlando Pirates’ Milutin Sredojovic.