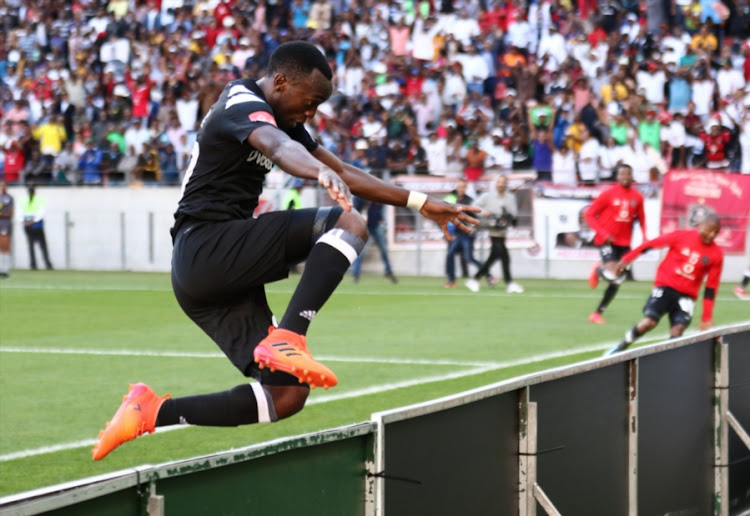 Zambian striker Justin Shonga scored to oddest of goals to send Orlando Pirates to the money-spinning group phase of the CAF Champions League after beating Namibian outfit African Stars 1-0 at the Sam Nujoma Stadium in Windhoek, Namibia, on Saturday afternoon.

The Buccaneers made heavy weather of their qualification after playing a 0-0 draw against the lowly rated Stars at the Orlando Stadium last weekend.

Shonga was one of the main culprits last weekend as he missed one of the big sitters but his priceless goal in Windhoek in the 57th minute ensured Milutin Sredojevic’s side will be among the 16 teams when the draw for the group stages is done in Cairo, Egypt, on Friday.

Shonga’s goal came as a result of intense pressure which was pilled on Pirates over Stars for the longer periods of this match.

Pirates winger Vincent Pule started the move and supplied a cross to Thembinkosi Lorch who sprayed the pass into the box where Shonga saw his first two shots on goal blocked before making it count with a third one.

Pirates dominated the first half and were unlucky not to take the lead midday way through the half when defender Nyasha Munetsi’s strike was ruled offside after he had connected with a loose ball in the area.

The weather conditions were also not in favour of the Buccaneers with a downpour occurring amid heavy wind on a bumpy artificial pitch a few minutes after kick off.

Sredojevic was forced to start this encounter with his A line-up after his decision to water down his starting XI last weekend backfired when Stars held them to a shock goalless draw.

Musa Nyatama and Xola Mlambo returned in the centre of the midfield while Lorch and Augustine Mulenga were restored to boost the forward line for the Buccaneers.

Pirates last qualified in 2013 for the group stages of the Champions League and they went on to lose 3-1 against Egyptian giants, Al Ahly, in the final.