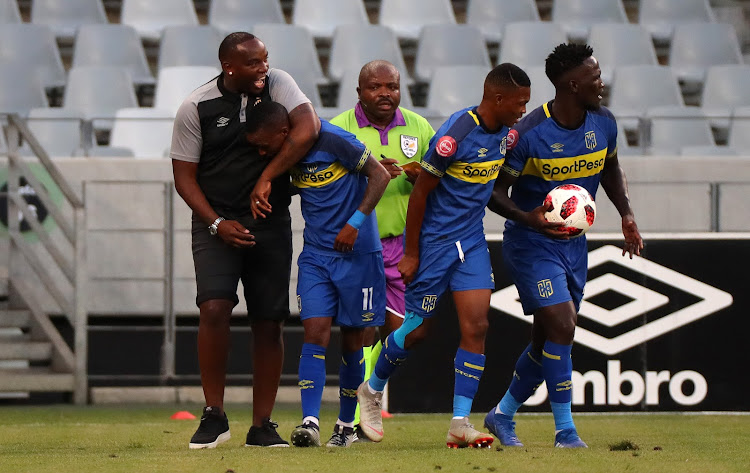 Benni McCarthy threatened to cut short Cape Town City’s Christmas holidays in a half-time tirade that proved one of the catalysts for a remarkable turn around in the Absa premiership on Saturday.

City were 2-0 down at the break at home to Bloemfontein Celtic in their last game of the year but two goals from Surprise Ralani saw them engineer a come-from-behind 3-2 win at the Cape Town Stadium that lifted them back into the top eight.

A horror goalkeeping error followed by a second goal inside the opening 20 minutes for struggling Celtic threatened a bleak holiday for the Capetonians.

“I threatened to cut short the holidays unless they change their attitude‚” McCarthy said after the game as he explained a changing room blasting of his players at the break.

City’s players went off on a brief vacation on Sunday and will only return on December 30.

Surprise Ralani engineered a remarkable second half comeback for Cape Town City with two goals in the space of as many minutes as the home team ...
Sport
3 years ago

McCarthy told them if they did not pull the fat out of the fire they would have to be back at training on December 27.

“You can imagine what my team talk was like at half-time‚" he said.

"I ain’t scared of anybody in that dressing room and I gave it to them. I told them what they probably needed to hear.

“They can’t take the fans for a joke. There are also hundreds of hungry players looking for a club.

"Our players are so fortunate they have the best job in the world but yet they go and perform the way they did.”

But McCarthy also praised the turnaround.

“Lucky for me‚ I’ve got a lot of honest players in my team‚" he said.

"They started then to do what they had been supposed to do from the first minute of the game.

“We started to play according to our plan and began to eliminate Celtic‚ who are a good ball playing team. We came out the way we were supposed to

“I’m delighted with the win‚ of course‚ but not such much with the manner of the victory‚” he added.

“I’m supposed to be happy with an exceptional comeback but to me it’s frustrating because we were non-existent in the first half even after we had spent the whole week training and working on ways to nullify a good football playing side like Celtic.

“We were sloppy‚ we let people come and spend their hard-earned money to come and watch us but we were already on holiday.

“We were heartless in the first half‚” McCarthy said.