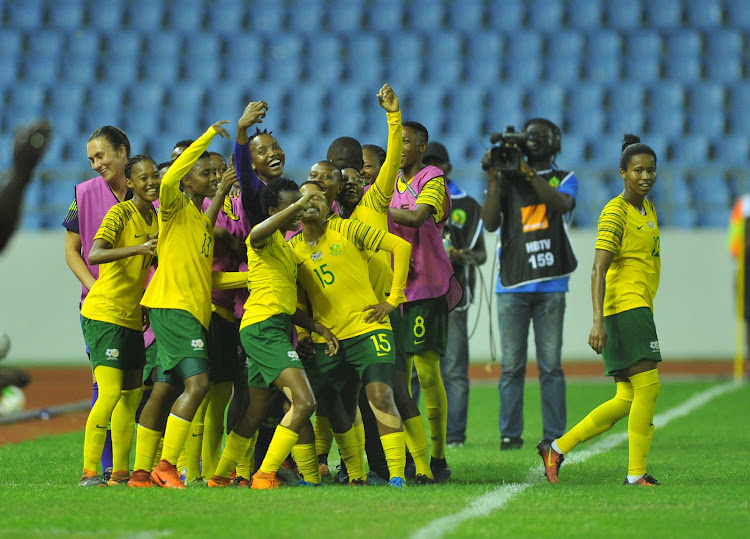 Banyana Banyana qualified for the 2019 FIFA Women's World Cup for the first time in the team's history. The World Cup finals will be staged in France.
Image: Sydney Mahlangu/BackpagePix

The year 2018 had plenty of highlights for South African football.

We take a look at five great soccer moments in 2018.

The year ended on a high, and again it was the women’s national team flying the flag of success for South Africa.

They sensationally beat 10-time winners Nigeria 1-0 in their opening match of the Africa Women Cup of Nations, and then twice victors Equatorial Guinea 7-1 before drawing against Zambia to cruise through the group stages.

Banyana eased past Mali 2-0 in the semifinals to seal a place at France 2019 – their first World Cup qualification – then succumbed on penalties against Nigeria in the December 1 final.

Bidvest Wits coach Gavin Hunt believes his side would be nine points clear at the top of the Absa Premiership log going in to the Christmas break had ...
Sport
3 years ago

And they did it by beating the mighty Orlando Pirates, no less.

Wedson Nyirenda and his men had to overcome Mamelodi Sundowns and Bidvest Wits to reach their first cup final.

They had to quell a Bucs reduced to 10 men, but fighting mightily to end a four-year trophy drought and earn coach Milutin Sredojevic his first silverware at the club, as Pirates fought back from a goal down twice to 2-2, and then penalties.

Again, Bafana Bafana were not there, and again South Africa continued its proud record of match officials representing the country on the world’s greatest football stage.

The glory keeps coming for South Africa’s most successful team of the Premier Soccer League (PSL) era, who have enjoyed their best purple patch yet in the carnation of Pitso Mosimane’s current winning machine.

Percy Tau was supreme as the league’s joint-top scorer steering the Brazilians to their eighth title, and Kaizer Chiefs (four championships in the PSL era) and Pirates (also four) have a lot of catching up to do now.

Bafana’s all-time top scorer and South Africa’s only player to win the Uefa Champions League became the first coach from this country to earn his Uefa Pro Licence – the highest qualification in coaching – days shy of his 41st birthday in November.

Just over a month earlier McCarthy had won his first trophy as a head coach at 40 – the MTN8, on penalties in the final over SuperSport United – in just his second season in charge of Cape Town City.

It is currently also just the former Blackburn Rovers and FC Porto striker’s second season as a head coach, so it’s an exciting career trajectory.