Five biggest soccer controversies that grabbed the headlines in 2018 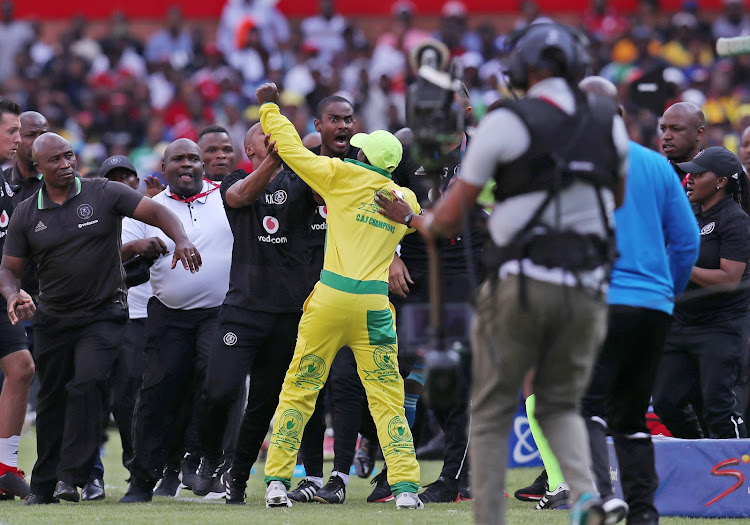 South African football never seems to be shy of controversies for the press to report on.

We have identified the five biggest soccer controversies that grabbed the headlines in 2018.

Worst of all was the serious beating of a security official.

Mamelodi Sundowns and Orlando Pirates could be drawn in the same group on Friday when the Confederation of African Football (Caf) conduct the draw ...
Sport
3 years ago

2) The PSL and Safa’s red card over OUTsurance

The SA Football Association (Safa) proudly announced a R50m sponsorship of referees‚ which they oversee‚ by OUTsurance in September.

Soon‚ though‚ the PSL and their sponsors were asking questions about the potential diminishment of rights‚ and a lack of consultation considering the garish outfits would be worn in league matches.

The spat of accusations and counter-accusations that followed made one wonder if the two bodies‚ supposedly operating under the same umbrella‚ were involved in administering football‚ or considered themselves more like opposing political parties.

No-one came out of the eligibility saga over Ajax Cape Town’s signing and fielding of Tendai Ndoro smelling like roses.

The PSL registered the Zimbabwean striker‚ and seemed unaware of a Fifa ruling that players can turn out for no more than two clubs in a season‚ and nor did Safa‚ who provided the international clearance.

FIFA have extended the insurance policy on players who get hurt on international duty in what will come as music to the ears of clubs critical in the ...
Sport
3 years ago

Ajax and their coach Muhsin Ertugral were warned‚ after an initial dispute resolution chamber (DRC) decision cleared them to play Ndoro‚ that the decision appeared wrong‚ but continued fielding him nonetheless‚ resulting ultimately‚ after countless arbitration and court challenges‚ in their relegation.

There appears to be no law against chief executives acting for a particular period.

But the fact that Lamontville Golden Arrows chairperson Mato Madlala has now lasted longer in the PSL chief executive hot seat in an acting capacity than any of her three permanent predecessors since 2011 seems a controversial statistic‚ never mind the conflict of interest questions.

When has an assistant-coach been so outspoken?

Orlando Pirates’ prodigy assistant Rulani Mokwena was given a rare opportunity ahead of the first Soweto derby of 2018-19‚ at FNB Stadium on October 27‚ to address the media.

Kaizer Chiefs have ended the year with the same monkey that was on their back at the start of 2018 and will look to the New Year for relief from the ...
Sport
3 years ago

He dispensed with pleasantries or diplomacy. He trod a fine line … . Actually‚ to be honest‚ he never really bothered with a line.

If the statements sparked controversy and divided opinion‚ they appeared to add much-needed fire to the stale old derby‚ which was one of the best for some time.

A rattled Chiefs succumbed 2-1 to Pirates. Solinas appeared to make team selections based on Mokwena’s criticisms.

And two months later‚ Solinas has been fired by Amakhosi. So‚ what was the fuss?